on August 13, 2018
"Let's take trending, mildly exotic but really the culinary artistic expression of some people's life work and smash it together with America's cultural frame of reference for ramen - instant noodles in a cup! Ramen soup! GENIUS!"

I'm a little horrified but intrigued. What is this marketing. Why. I have so many questions. And six minutes while the ramen cooks to think about it. Is six minutes really "instant?" Hmm... 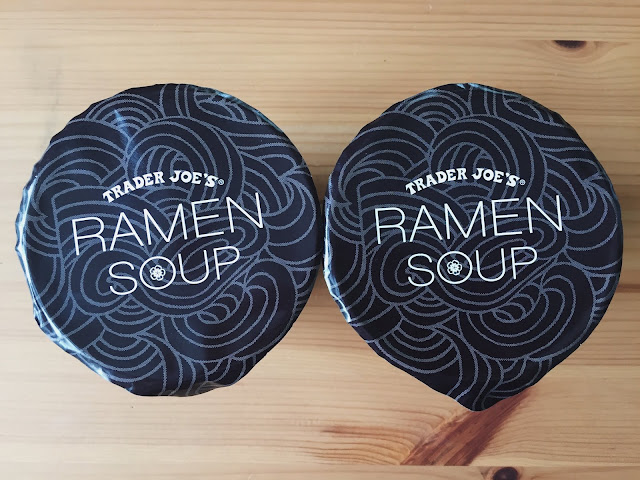 So the internet has gone crazy over TJ's new "ramen soup cups." Which to every Asian American, with one look at the packaging, screams glorified cup noodles. Not ramen because that's different y'all. (But wait - isn't cup noodle ramen? Uhhh...yeah sorta kinda like how Taco Bell is "real" Mexican tacos. Real in once sense but not in another sense) 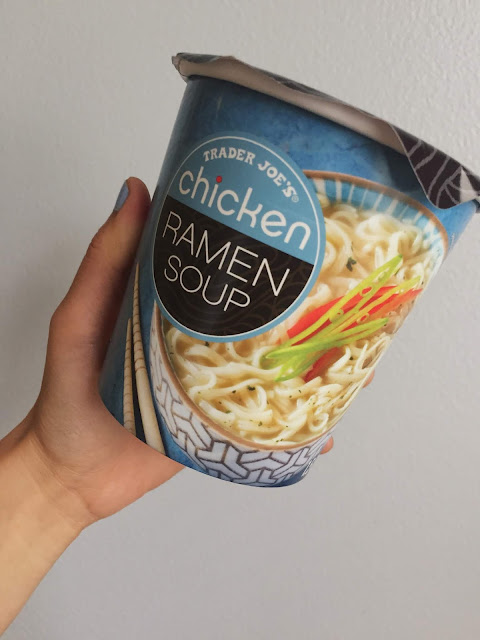 Chicken! Because A says meat is superior and because healthy-inclined TJ's shoppers want the "healthier" meat. 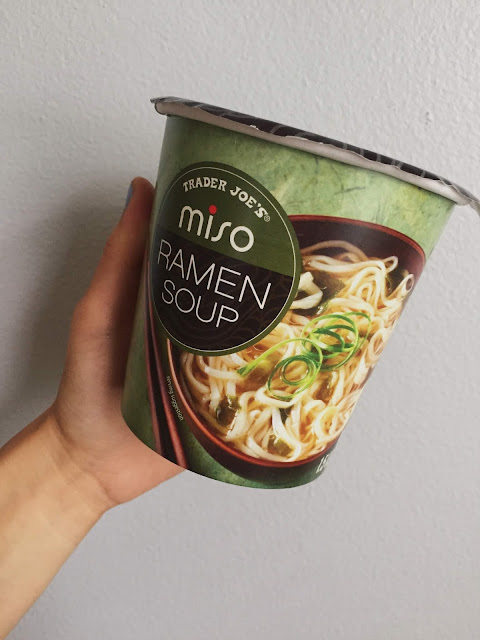 And miso! It's vegan! Rejoice! 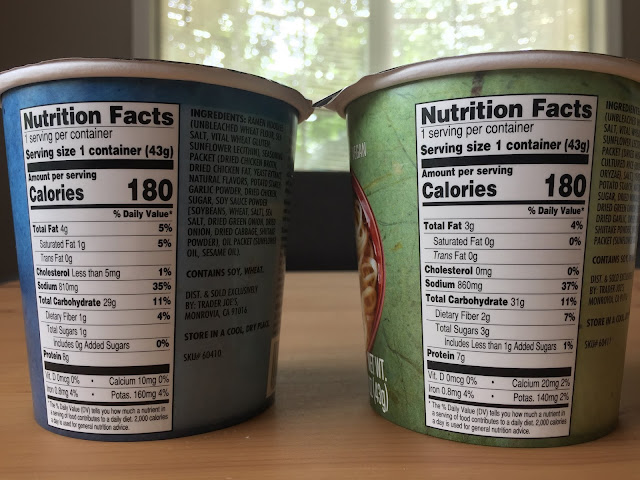 But before you get too excited, DANG that's salty! Unsurprising for a shelf stable cup noodle. Not exactly the health food. More like the food dad cooks while mom leaves us to fend for ourselves. :P 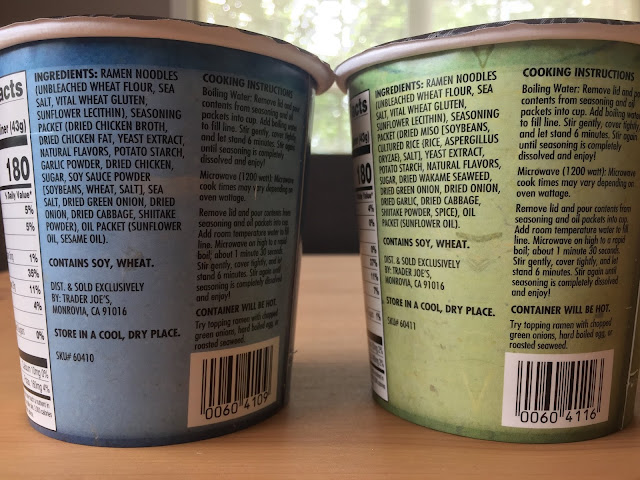 What's missing? MSG and other inredients that make processed food so delectable. No time to rant here about that and its cultural connotations. 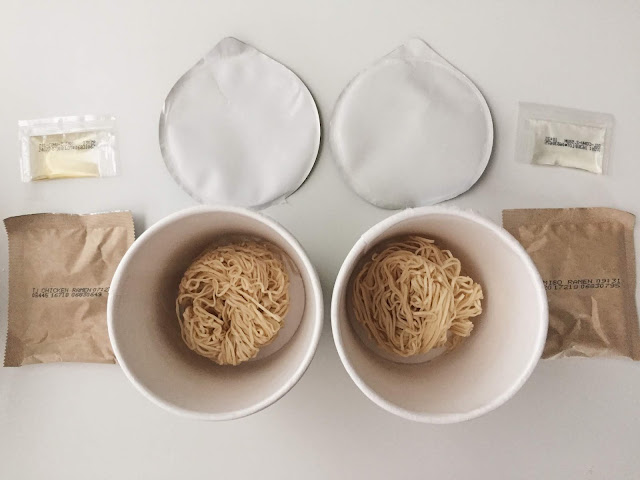 Left is the chicken, right is the miso. Each cup comes with a seasoning packet and a package of oil (mix of sunflower and sesame) for flavor. 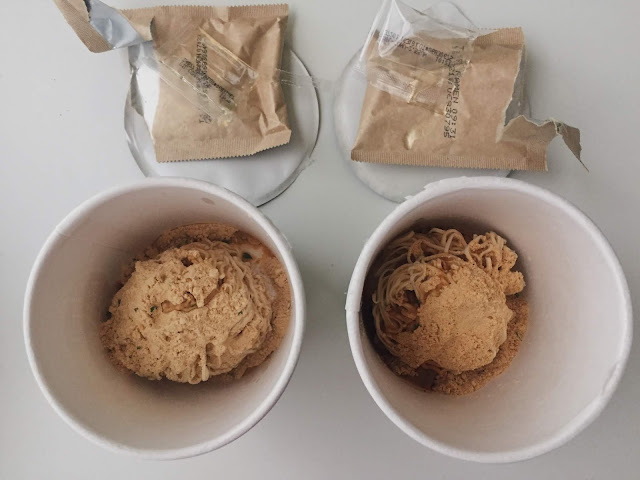 Dump everything in and add boiling water. I should note - my boiling water had probably cooled a little so my noodles came out a little underdone. So if you're going to eat this, use boiling water y'all. 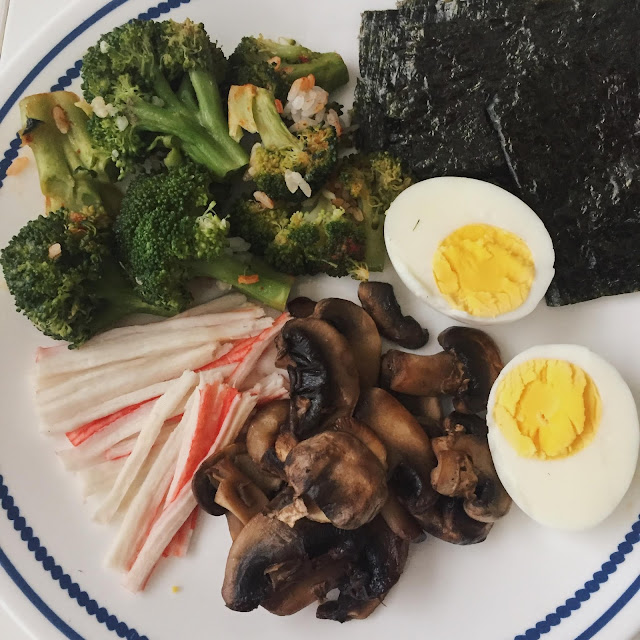 In the meantime, I prepped some fridge leftovers to doctor the noodles. Man does not live on noodles alone. Unless you're a starving college student. But even then - there are other ways. 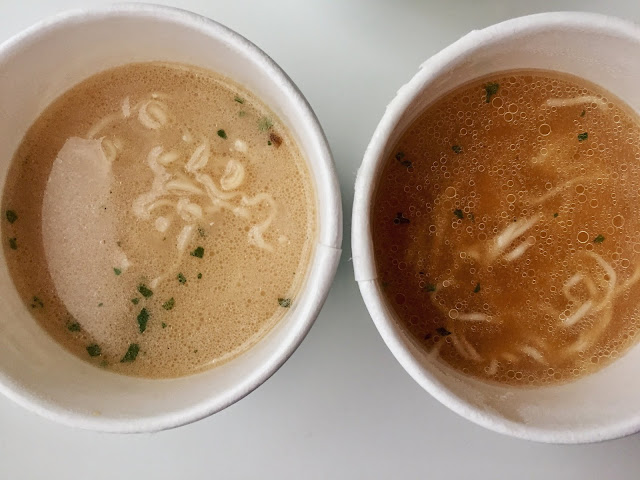 Most instant noodles that I've had take five minutes or less to prepare, so 6 minutes was a little suspicious to me. I did peek a little early on the miso noodles (right), so those noodles ended up being a little more underdone compared to the chicken noodles.

1. The noodles - I didn't like them and neither did A. Maybe we've been culturally conditioned to expect the chewy curls that are typical of instant ramen. It's like the noodles here wanted to be curly, changed their mind halfway, and went back in the other direction only to realize that they should have never made that change in the first place so they decided to give up on life. Thin, not particularly chewy though some user-error on my part could be blamed for that. But I'm not convinced that the texture of these noodles will "transport you to a Tokyo ramen bar" as advertised in the Fearless flyer.

2. The broth - Admittedly, this broth does taste much better than the soup from your typical instant noodles. TJs has made a formidable attempt to mimic authentic ramen broth, you know the type that takes two days to make. The chicken soup has a stronger garlic flavor while the miso has a stronger note of soy (duh, miso = fermented soybeans). Both lean salty-tasting, of course, but they do have that umami essence and a slight complexity that normal instant noodle broth lacks. But it could have just been the fact that most broths taste better when piping hot - we noticed that once we got halfway through the chicken ramen soup, the taste changed a little. It took on a bit of sourness with chicken fat, and it really wasn't that pleasant. And once both broths cooled, neither were pleasant to drink. Very typical. 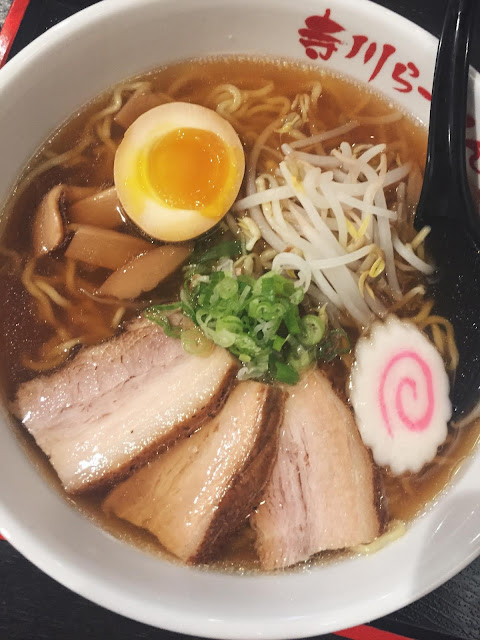 This is how I doctored it to make it taste better - KIDDING. Above is the shoyu ramen I got from my new favorite ramen place in my area.  This was definitely not my expectation of this ramen soup cup, but perhaps TJ's was aiming to paint this in a convenient form, much like their attempt at those cold brew coffee bags. 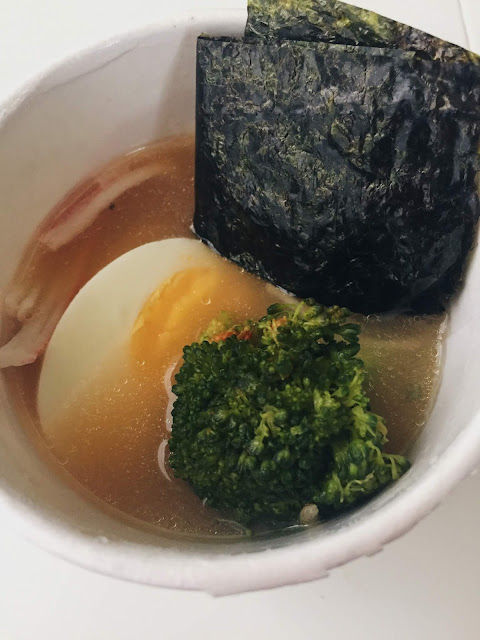 3. No amount of doctoring will make instant noodles like anything but...instant. I added leftover hardboiled eggs, imitation crab, broccoli, and seaweed. It didn't change the noodles or make anything taste better, but it was more so for the nutrients for me. This isn't one of those Ikea furniture hacks that you can do to make your place look like it was furnished by West Elm instead of Ikea. I'm not knocking Ikea or instant noodles - there's an appropriate time and place for both, particularly if you're burning the midnight oil and you need something to slurp down to power through another cram session.

4. IMO, $1.29 for the 1.5oz serving of this cup noodle is not an expensive sticker price on the surface, but it's expensive for what it is. Though every other instant noodle is laden with MSG and other unpronounceable ingredients, those you can buy in bulk at basically any store, and it usually comes out to something cheaper than $1.29 per serving.

5. Food analogy for you - I've had a few L&D patients recently who have expressed that they CANNOT WAIT to be not pregnant any longer and eat a cold cut sub (Tastee sub for y'all Tastee fans). So it's like if you pick your favorite sub shop and consider that to be THE best sandwich and then Trader Joe's tries to imitate that by making...a Subway sandwich. Yeah. Ehhhhhh not really the real deal for reasons you know why.

6. I would only ever repurchase this if I lived in an Asian food desert - maybe rural North Dakota. It's a solid ballpark representation of the real thing but for everyone else with access to the real deal? Pass y'all, pass.