on June 11, 2018
Imagine it's 2050. And every carb you love as been replaced with cauliflower. Do you scream in horror? Do you jump for joy? Or are you a little confused, maybe somewhere in the middle wondering why we have to live life on the extreme ends? No matter where you stand, it's actually 2018. June. And TJ's is conquering the cauliflower world y'all. This cauliflower gnocchi has been probably one of THE most hyped Trader Joe's products of the year. Everywhere on social media. Every food site I follow is like "OMG TRADER JOE'S HAS CAULI GNOCCHI" followed by a bunch of exclamation marks. I'm like...calm down y'all. It's probably aiite. In fact, I wasn't even planning on purchasing. But then it stared me down one day in the frozen aisle and the rest was history. 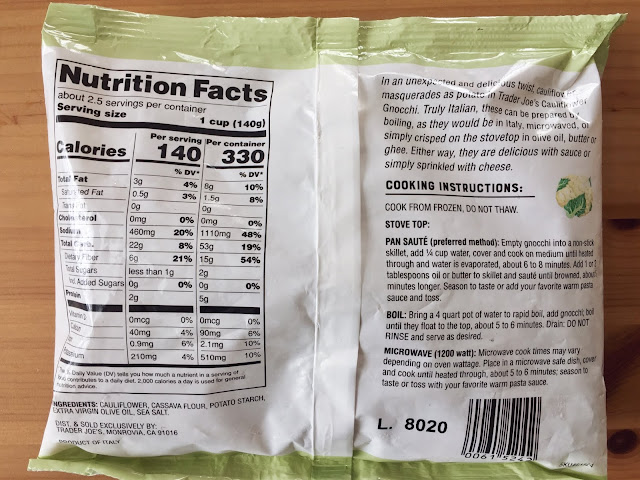 Part of my initial ambivalence was related to the fact that I'm not a huge gnocchi eater. Sure, if it's an option at an Italian restaurant or another fine-dining establishment, if it sounds good I'll take it. But I don't really miss it when it's not there. So to me, cauli-gnocchi seemed superfluous. Anyhoo - it seems that these can be prepped a number of ways in typical dumpling fashion. There's a ton of sodium, which isn't surprising so I wouldn't eat it everyday. Prior to my first go-around, I read that these gnocchi are almost taste-less (though salty...?) on their own, so I had already made up my mind to make an Italian-inspired dish and sauted it according to package directions. 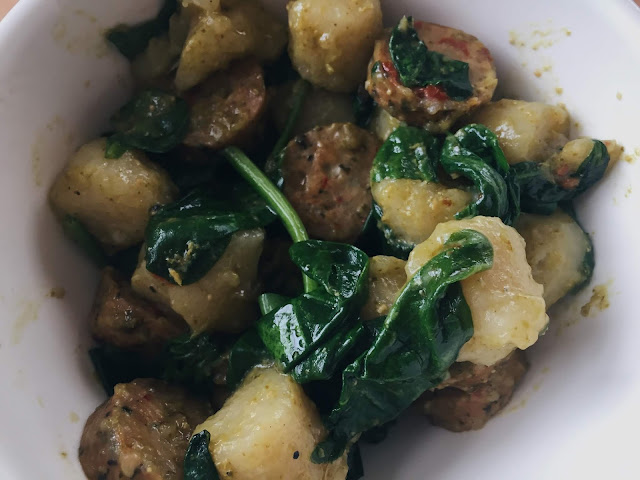 I made this maybe wo months ago when the cauliflower gnocchi first hit the shelves. By now, the general internet consensus is that the package directions uses way too much water, which results in sort of a gummy end-product. Reduce the water to either 1tbsp or saute in some oil to get that crispy exterior "crust." I made it with some chicken sausage, spinach, and pesto. And it was definitely too salty for my taste. But I found it texturally intriguing - fluffy, chewy, vaguely reminiscent of classic gnocchi. More surprisingly so, I didn't think it was horrendous. In fact, it reminded me a bit of an Asian cousin - the rice cake. Not that rice cake (those circular disks used in many diets, often Styrofoam-y, and you need to eat like 5 of them to feel full). So I made a mental note to abandon the Italian and Italian-American prep route in order to try something different.

It's 2018 y'all. I had to renew my CPR certification online, and my fake patients were named, "Kevin Sun, Sofia Lopez, and Amit Gupta." All but one of the patients were people of color - certainly a step in the right direction as far as cultural diversity is concerned. And while it is good to have that representation, it definitely does not end there. The whole point of representation is to recognize and embrace the fact that actual life is diverse - in my field, it's the people of color who are having all the babies! (Maybe not now. Cuz it's summer. And like...everyone at the grocery store is pregnant and due soon. #jobsecurity). So while I love that TJ's carries a diverse selection of difference cuisines, let us not stop there. We must think bigger! Just like you can't box people of color - patients or healthcare providers - into stereotypical roles in a training video, you certainly cannot and should not limit TJ's food diversity to whatever TJ's provides. Because while I accept that America loves Trader Joe's Mandarin Orange Chicken (sigh, it's aiite. Not my taste), uh...hello? Did y'all just see that TJ's just gave us a moderately acceptable base substitute for a number of actual Asian dishes? HELLO TTEOKBOKKI. 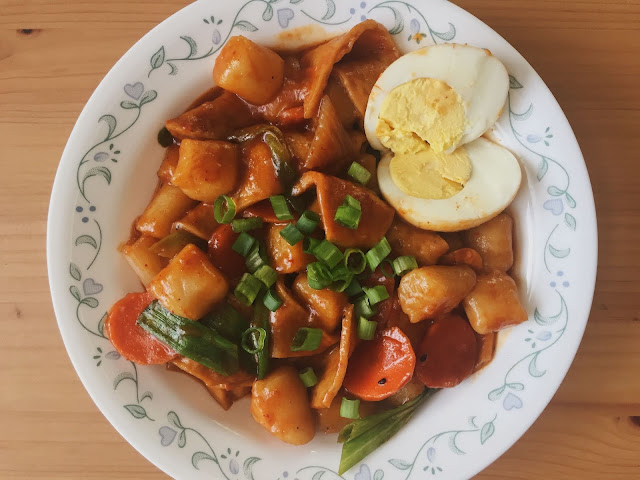 If you like spicy food and carbs and you haven't had tteokbokki (spicy stir-fried Korean rice cakes), you have not lived! It's sweet, spicy, and so satisfyingly chewy. Definitely an indulgence for me though, so I was curious to see if I could make a "healthier version" with this cauliflower gnocchi. Mind you- I've never actually made tteokbokki at home before, so this was a bit of a "go big or go home" type of experiment. I used a little less water/anchovy stock than what the internet recipes called for and real gochujang, not that TJ's version that has apparently since been recalled. I must say that this is a pretty satisfying dupe with some obvious textural differences. Since it's made out of cauliflower mixed with cassava and potato starch, it lacks the density and elasticity of a normal rice cake that makes it so nice and chewy. It's lighter, pillowy, but leans toward  chewy playdough, so your teeth kinda sink through it without much resistance. This probably doesn't sound particularly appetizing to everyone, and cooking it too long can make it go from pillowy to gummy in an instant. But it's really not bad. I don't mind the neutral vegetable taste, though if you aren't into veg that might be a turn off. It works for me, and cooked in a thickened savory, sweet, spicy sauce satisfies the tteokbokki craving. 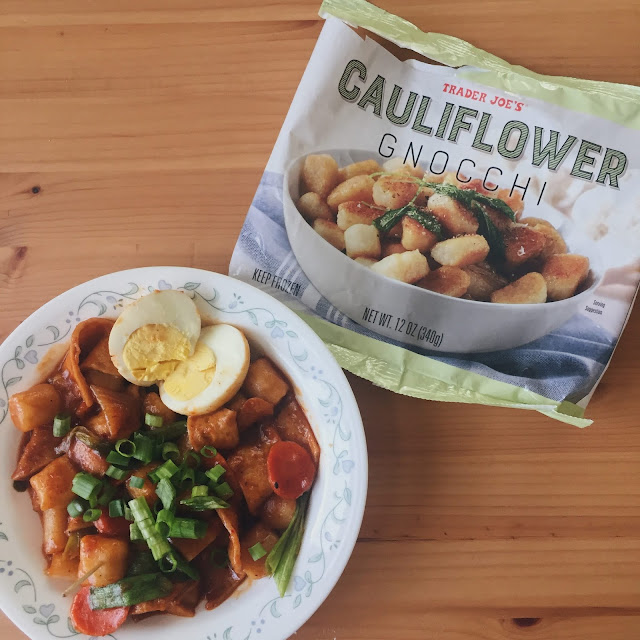 But of course - there's still a ton of salt in this compared to regular rice cakes that are pretty much flavorless and meant to take up the flavor of the surrounding dish. These in that spicy sweet sauce with the gochujang and a bit of soy sauce have left me quite thirsty. But would I buy this again to make this? Likely. $2.69 for a 12 ounce package of a multifunctional product, salt and all. Bring on the cauliflower rice cake dishes.