on June 30, 2015
There's a reason why I have not once joined in on the office Chinese-takeout order. It's takeout. As a [2nd generation immigrant] Chinese [actually Taiwanese] person (have to make those cultural disclaimers), this is how I feel about Chinese takeout probably 95% of the time. That's not to say it's true about all Chinese people, but I happen to raise the standards high when it comes to Chinese food. When it's what you've been eating for the duration of your life almost every night and on almost every vacation anywhere in the Continental US, you have certain expectations. Amirite?

I have held off on reviewing Trader Ming's products, mostly because in my mind I don't want my opinion of Trader Ming to tarnish my view of the main guy Trader Joe. It would probably take more than subpar frozen Chinese food to make me think twice about Joe, but the idea of Trader Ming triggers a reflexive stank face for me. I'm trying y'all to contain it.

It all happened one afternoon, A & I ran into Auntie I-can't-remember-her-name-so-I-hope-she-forgives-me-if-she-happens-to-see-this at the Chinese supermarket. Yes, we have to grocery shop together because now I have to feed someone who consumes probably 3x more food than I do (and eats differently to say the least). Trader Joe's came up in conversation, as it naturally does often in my conversations with people, and she raved about this Mandarin orange chicken. The convenience!  It's just as good as takeout if not better! Skeptical but curious and hungry, I picked this up a few days later on my way home. 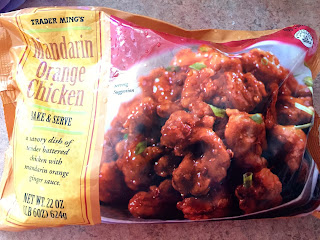 Can I just say, the only time at least in my household growing up we ever had mandarin orange anything as part of dinner was AFTER the meal when it was all over for dessert. 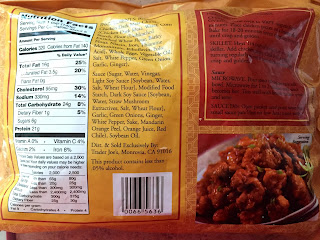 Long but at least pronounceable ingredient list.  And it would happen that we had leftovers from a Chinese restaurant hanging out in the fridge.

The chicken comes fully cooked. Whether you bake, sauce, or nuke it, the directions say to heat the sauce up separately and dump over the cooked chicken. Bad idea. The chicken should be heated IN the sauce for maximum flavor payoff. Also, I could have used a little more of the sauce; the first time I made it I used half of the sauce packet for half of the amount of chicken in the bag and even watered it down after tasting it because the sauce was too sweet for my liking. (Yes, this makes a flawed review but whatever) 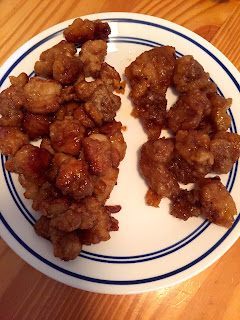 I can see why this would appeal to the masses. The sauce resembles typical "mandarin orange takeout sauce." It's bright, not overly artificial, and sweet. The main problem however, especially in comparison to the leftover General Tso's, is the meat. This was more breading with a chicken-like filling rather than breaded chicken. So yes, if you heat it up correctly it does crisp up nicely but lacks the sustenance of "real meat."

If you're into the world of convenient frozen Chinese food, I'd skip this and go to Costco (cheaper, bigger, tastes moderately better). It wasn't terrible by any means but was certainly forgettable and easily replaceable.