on May 31, 2018
By the time you read this, it's probably June. And we all are wondering where half the year went. How are you doing with your New Years Resolutions? Remember those? I vaguely recall desiring to not eat entire bags of salty crunchy snacks in a day. Or two days. Because ice cream has no pull over me. Neither do brownies, however warm and gooey and inviting they appear at 2am at work. It's always been the salty crunchy. And finally, a new but familiar snack. Spicy cheese crunchies AKA TRADER JOE'S HAS HOT CHEETOS. Shut the front door because I must have them! 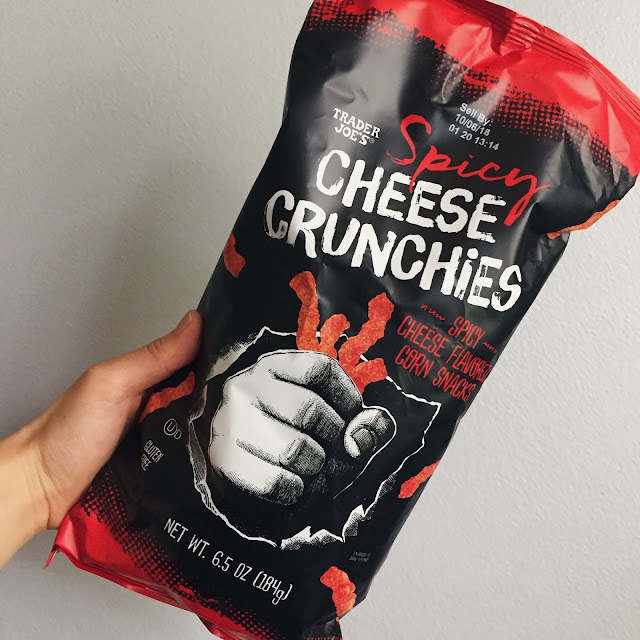 In my Trader Joe's, the normal Cheeto dupes aka cheese crunchies hang out next to the register. Y'know...if it's not enough to stare at what other people are buying, cheese crunchies stare you down while you stare them down and contemplate whether or not to take them home. Maybe that's just me. I actually have not tried the regular cheese crunchies - I'm trying to contain my snack buying but TJ's makes it so difficult with these, these, and the return of these. 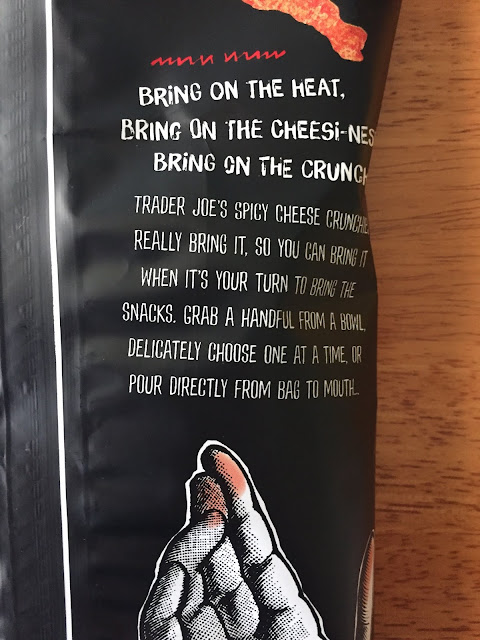 Of course TJ's wins in the packaging department again. Sleek black packaging. A fist busting through the bag demanding change- I mean more cheese. That beautiful depiction of cheedust (chee-crunch dust?) - a sign of conquering and satisfaction. The intensity. The feels! I just watched Dunkirk y'all - all that's missing here is a Hans Zimmer soundtrack to make it more epic. :P 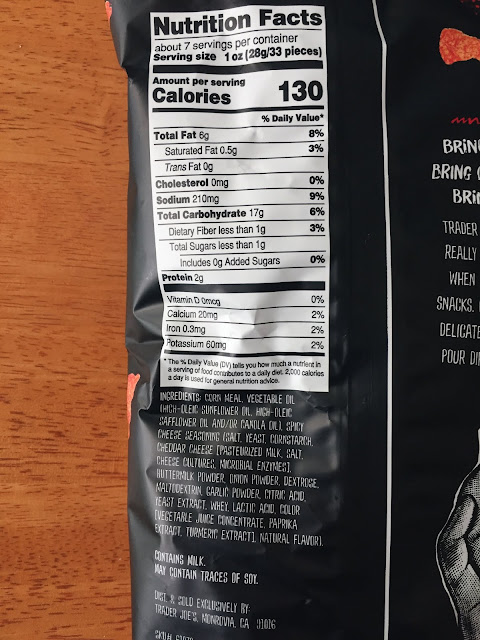 The right question here isn't, "what's in the ingredients?" Rather, we really should be asking, "what's NOT in the ingredients?" Artificial colors? Well yeah. But how about that one ingredient in basically every traditional junk food that makes junk food so addicting and delicious? M.S.G. A loaded topic I don't have room (or the professional chops) to discuss right now (but it's not just in Chinese food). 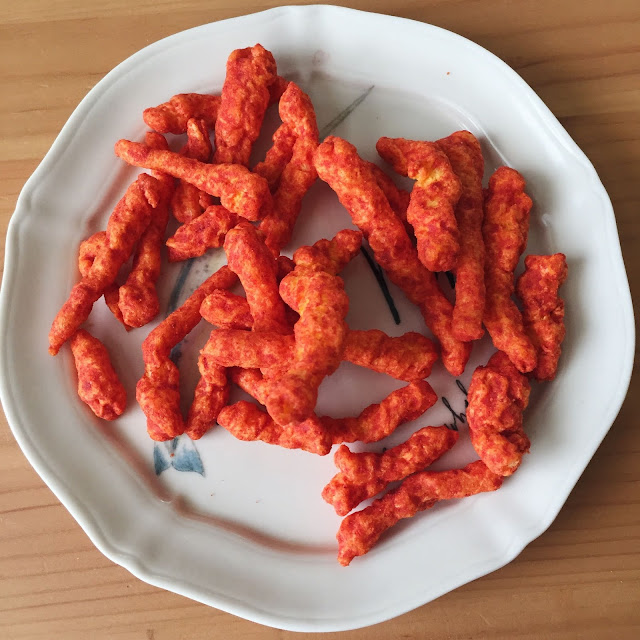 They certainly look like hot Cheetos - at least they share the same shape. I think they aren't as "flaming red," probably due to the non-artificial coloring. Texturally, they seem drier and less greasy compared to a normal Cheeto, which means that TJ's has managed to produce a [marginally] healthier version. But unless you're eating this right next to a hot Cheeto, the difference isn't really that significant. It's still crunchy, and it still tastes delicious. In fact, I think I prefer these over regular hot Cheetos. The cheese flavor is more mild. For me, it has just the right kick - it has more of a warm chili spice that sits in the back of the mouth vs. a numbing or burning spice that clears your sinuses. A and I disagreed about the spice level - I find this less spicy than a flaming hot Cheeto while he thinks they are spicier. It has a sour note, probably from the buttermilk/cheese/yeast extract - which reminds me of Takis. And interestingly, aside from the spice itself, it tastes like a Korean pancake for some reason. We've gone through half the bag and I still haven't figured out why - is it the onion? the garlic? A says it has something to do with the starchiness. I guess I'll have to eat more for "research" and get back to y'all. 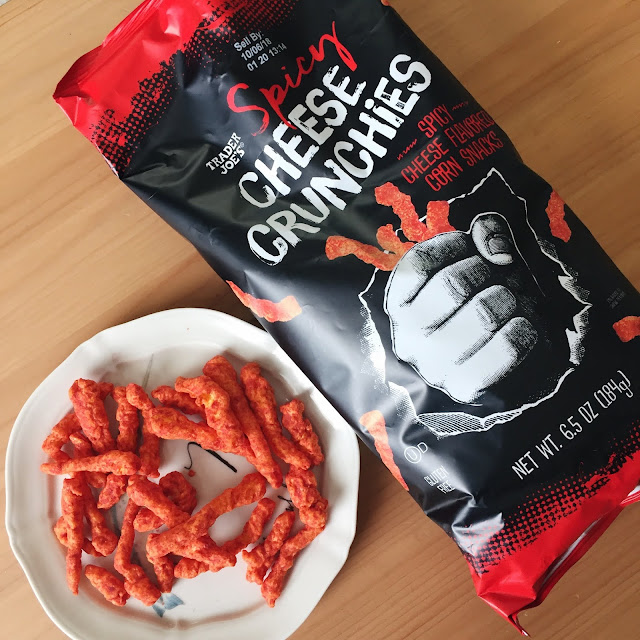 No matter - these are delicious. And spicy - maybe I didn't notice the sweat before because I was eating them after going to the gym. $1.99 for a 6.5oz bag.

I should say this - if you are a diehard fan of the OG flaming hot Cheetos, you probably won't think these are better. For a bunch of reasons - the originals are spicier, crunchier, umami-er, and likely more addicting because of the MSG. As for me, I like that I can eat the TJs dupes without feeling thirsty afterward. That's enough of a value for me...between the snack and me getting more out of my gym membership. :P