on March 17, 2018
The increasing sunlight outside is certainly brightening my mood. But my body seems to think that spring should follow suit. That clearly hasn't been the case. It's still rather chilly for my taste, but I've been longing for more spring-esque food. Y'know..full of fresh tasting veggies and a hint of spring/summer harvest. 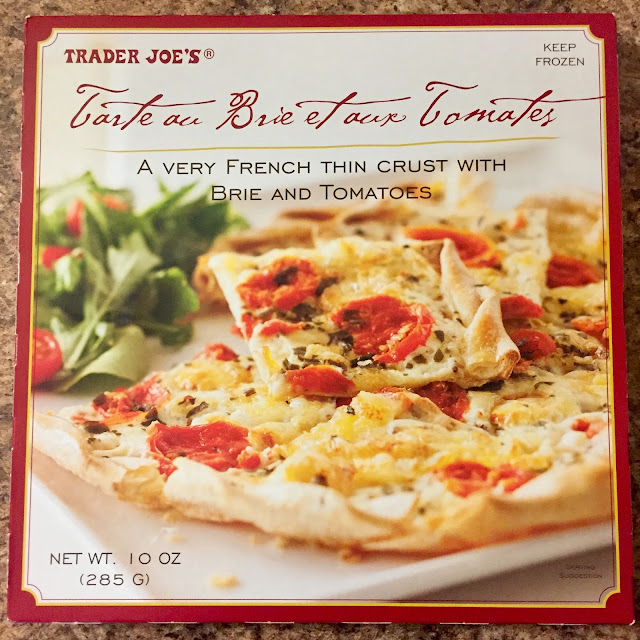 No this isn't a pizza, but it's similar in shape and located next to all the other frozen pizzas. I picked this up the other night for a "we-need-to-eat-something-other-than-salad" dinner with friends. 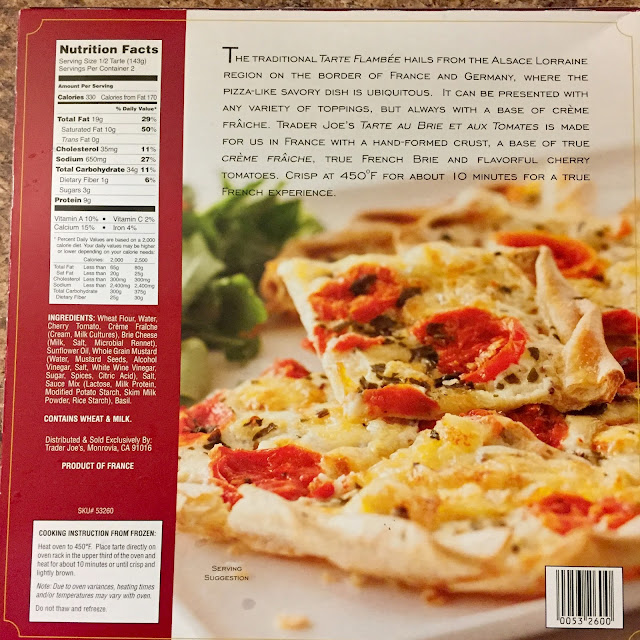 TJ's products hailing from France have had a pretty darn good track record, especially wherever butter and bread have been involved. I've never had a tarte flambée, but apparently it's a German creation but easier to pronounce in French. No open flames here but the original was cooked "in the flames" like in a wood-fire oven, hence the name. In my book, if it looks like that and hails from France, it has to be good right? 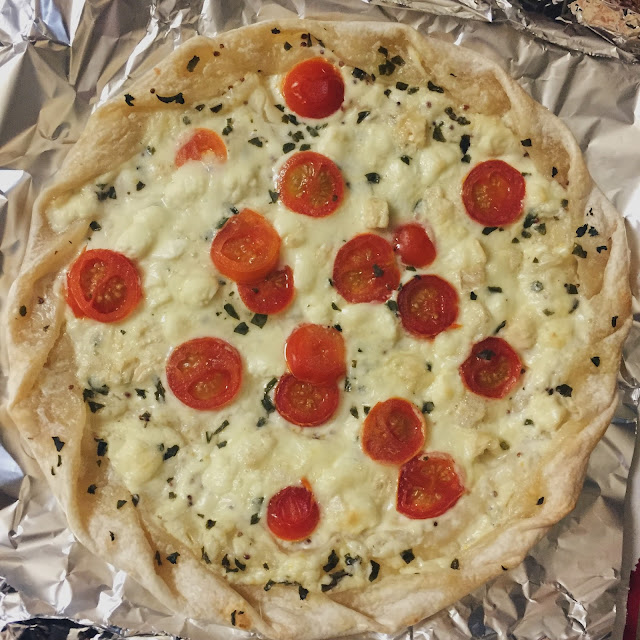 I'm torn y'all. This tarte tastes fantastic, but there is something about the structural integrity that doesn't quite seem to live up what this should be in my mind. The crème fraiche base provides such a luxurious mouth feel along with the brie, which has just the right amount of potency and creaminess without being over-the-top. And the tomatoes! They are so fragrant and juicy and delicious, like that of vine-ripened tomatoes plucked during the height of the summer harvest. That and the little bits of basil? BLISS.

Perhaps my misgiving about the structural integrity has something to do with my lack of exposure/understanding of tarte flambée. According to the internet, if a pizza and a crepe had a baby, you'd get the tarte flambée. So maybe in some world, the fact that the bottom crust never crisped is acceptable? We baked it according to package directions (but not directly on the oven rack because c'mon...that's like foreboding disaster) and the sides did crisp, wonderfully so. And while the bottom wasn't soggy, it stayed soft and floppy. Delicious, sure, and crepe-like but unable to hold up the toppings. Maybe some people out there like eating pizza with the toppings sliding off such that you have to eat those elements separately. But it just doesn't seem right here. I mean who eats pie filling separate from the pie crust? It's an entity that has to be eaten together! The only way I could eat it was by folding the slice in half. Which is fine..but it doesn't reconcile this question in my mind - is the tarte flambée supposed to be crepe-like all around or crisp like a tarte? I wish it could be either a crepe or a crisp tarte/flatbread/pizza but not both. It just doesn't work trying to straddle both.

My gut instinct, confirmed by a brief internet search of tarte flambée recipes, says that even if this is a marriage between pizza and a crepe, the bottom is supposed to have some kind of structural integrity. Like a flatbread. I mean Julia Child is lauding the "crisp pastry" of a tarte flambée, so how can it be that the crust never crisps? It's rather disappointing and bittersweet. It's like having the triple axel, the potential for rising to the occasion and then some, but not being able to land that in a clean program, which leaves you wondering what could have been. Not a perfect analogy (because Mirai Nagasu is a person whom I love and admire, not just for her skating, and not an impersonal tarte!) but just frustrating because this could have been easily a 8/10 product (which for me is a glowing rating).

Yes, I could take this home again and re-bake it in my cast iron to see if the crust holds up better. But as is, without any special doctoring, it's a nice tasting flatbread, very shy of its potential greatness. Repurchase for this $4.99 tarte for two? On the fence ambivalence y'all.