on March 11, 2018
Real talk: I tried this because Mindy Kaling apparently said it was good. Once again, social media has proved so cool that you can do nosy things like stalk the normal-but-not-really-normal-lives of celebrities. And once again, social media easily hypes up things that ought not to be hyped. Like freeze-dried okra. Ugh. So in my quest to not consume entire bags/boxes of delicious salty crunchy snacks in the span of 24-48 hours (still trying FYI with varying success if I'm honest), I've turned to vegetables. Sometimes. Can I just say - there are definitely more healthier options for satisfying a sweet tooth than a savory/salty/crunchy tooth. I mean sweets you've got chia pudding, yogurt with any fruit, pretty much every granola/cereal bar ever, smoothies, breakfast cookies, and on and on. And what do the savories have? Hummus and veggies. Maybe some buffalo cauliflower. Wahoo. So exciting. Oh and snap pea crisps I guess (Inner Peas by TJs are decent but I prefer the original Calbee ones. They are slightly greasier. :P) 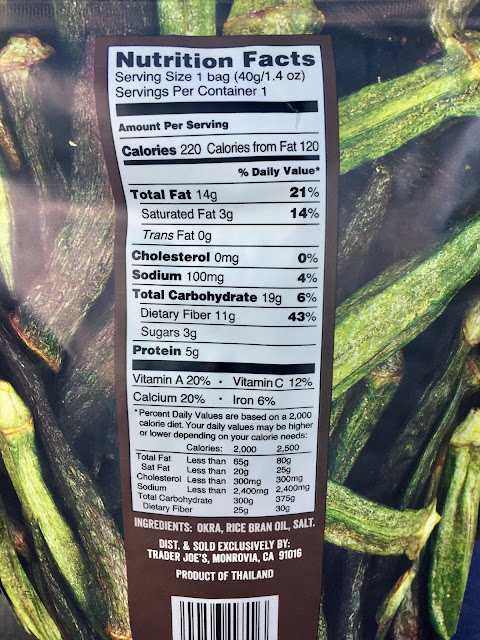 For those of us who are habitually are able to consume entire snacks in one sitting, the entire bag ($1.99) is one serving. Not much salt. An odd amount of protein for a freeze dried vegetable though. 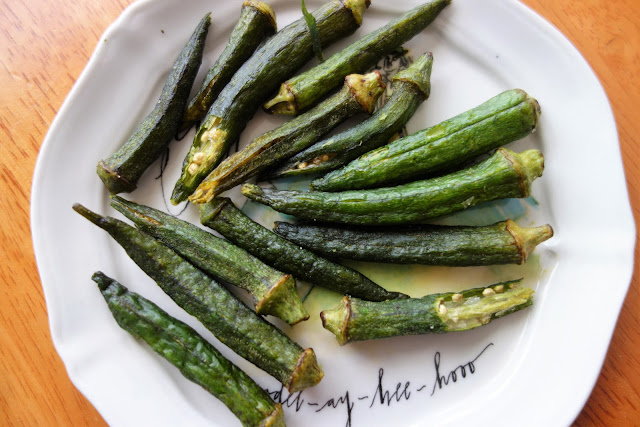 A and I recently started watching David Chang's new Netflix documentary, Ugly Delicious, where he explores comfort food. Interesting show thus far...but unlike most foods that we've seen on the show, let me just say that these okra are kinda ugly and not that delicious. Now okra as a vegetable I respect and like on occasion - I've mostly had it stir-fried and in soups. In the south, I've had it deep-fried (and that of course is delicious as are most things that are deep-fried). But freeze-dried? I don't get it.

They look like shriveled up little peppers. Not the most atrocious looking things ever but meh...alright I guess. They have a generous amount of crunch and crispness, even more so than the snap pea crisp but without the flavor. Not much grease, which is great from a health standpoint, but also means not much flavor. It had an ever-so-slight bitter taste that reminds me of why people hate vegetables. There also wasn't enough salt for flavor.  (You see the recurrent theme?) But were they edible? Yes. I didn't love them but they also weren't completely disgusting like the crispy crunchy broccoli florets. Nevertheless, I don't think the freeze-dried process did the okra much good at all.

If you're hankering for a healthy snack, you are much better off picking up trail mix, nuts, or some actual rabbit food. Personally, I'd rather eat raw kale out of the bag than eat this. :P

TL;DR: Trader Joe's Crispy Crunchy Okra. Mindy Kaling or no Mindy Kaling endorsement, freeze-dried okra is NOT a thing. Move on y'all. 4 out of 10.