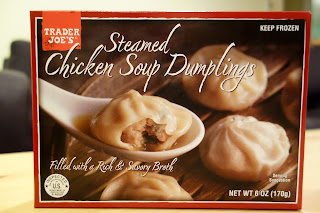 Y'all have to understand. Even in the real world, good soup dumplings are hard to come by, unless you live in Shanghai or Taipei or near a hole-in-the-wall joint where they enslave employ a Chinese grandmother. So when TJ's comes out with a freezer version, it's very natural for me to get antsy. 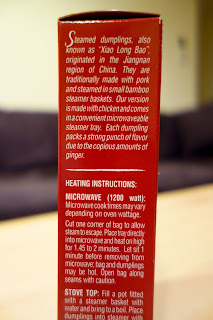 Steamed dumplings, also known as "Xiao Long Bao" originated in the Jiangnan region of China. They are traditionally made with pork and steamed in small bamboo steamer baskets. our version is made with chicken and comes in a convenient microwaveable steamer tray. Each dumpling packs a strong punch of flavor due to the copious amounts of ginger. 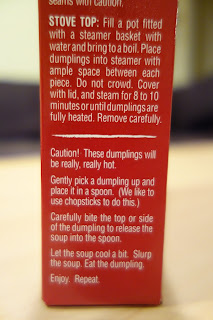 They even included instruction on the proper way to eat this. I give them extra points for the cultural competence, though I still want to know why it wasn't marketed under "Trader Ming" when this is CLEARLY Chinese food. 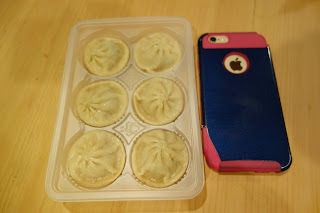 iPhone 6 for scale. Not the biggest babies out there. Kind of disappointing size-wise. But guess what, one box = 1 serving size. 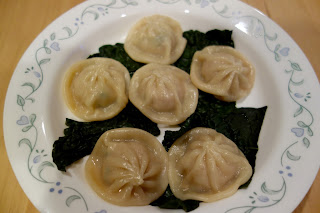 We passed on the nuking and went for the steaming method. Yes, I lined the plate with non-Trader Joe kale leaves as a precaution to prevent sticking, which protects you from accidentally ripping open the skin while trying to pick it up. Keeping the skin intact is essential for retaining whatever amount of soup these little soup dumplings might have! 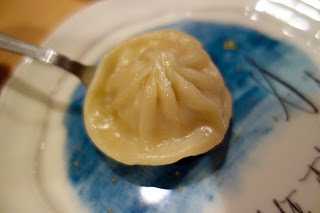 I'm still straddling the post-college and married adult life. We only had 4 forks for the first 4 months of marriage, okay, so obviously I wouldn't have any proper soup spoons around. :P 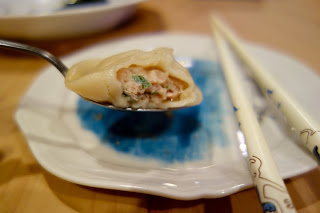 Well guess what, it wasn't that nightmarish at all. In fact, I set my expectations for this SO LOW that they exceeded them. These actually taste pretty close to the real thing. TJ's, ya got me there. I think it's the "copious amounts of ginger" and a bit of green onion that lend the authenticity, although it didn't really taste "copious" to me. It just tasted..normal. Once I figured out that TJ's really tried to make an edible soup dumpling, I switched to the real grading scale I have used on every soup dumpling I've ever tried.
I'm quite curious to find out who the supplier is. TJ's is very tight-lipped about that. They don't even tell you the city of origin - San Francisco? Brooklyn? I'm assuming it's domestic, because if it was international they'd said that on the package.

The price per dumpling comes out to $0.50 each, which is pretty standard and actually cheaper than what you would pay at a restaurant. It tastes close enough to the real thing that for $3 a person, I could stock up on this and be prepared in the event that 1) snowpocalypse coincides with an intense soup dumpling craving or 2) our go-to soup dumpling place gets shut down for violating the fire code, violating some health department standard, losing the grandmother that is trying to work as fast as she can as an underpaid slave to churn out those soup dumplings, or something else only hole-in-the-wall places could do. Not too shabby. A gives his stamp of repurchase approval as do I.