With all the snacks* I've been consuming around here, it's about time for a vegetable review. Just in time for the season where we give thanks by gorging ourselves with ridiculous amounts of food. Go 'Murica.

*I mean chips when I say snacks, because there have been too many tempting chips around. I went back for more sriracha chips, but they aren't there!! The TJs employees said they have no idea when the next shipment will arrive. Apparently every other TJ's around has been trying to restock with limited success. They also said when it does finally get restocked, I could call ahead and reserve my hoarding stash what I want to buy. 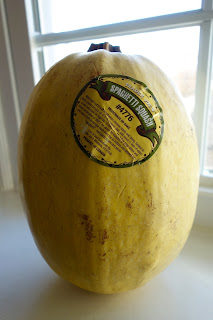 I have yet to jump aboard the zoodle train, but I am a convert to spaghetti squash. It's not too hard to prepare, and you can eat a lot without feeling weighed down. TJ's usually carries spaghetti squash during the fall and winter months, but you can find them almost year round in most supermarkets, which is where I normally buy them because TJ's charges a standard unit price for produce regardless of weight. I usually avoid the squashes at TJs because they are usually on the puny side, maybe 2 pounds at best. But the other day, I stumbled upon a gold mine and swiped the biggest one. 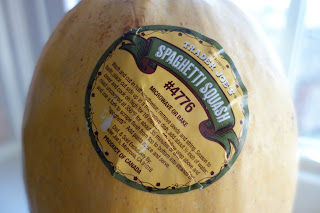 Nothing against the Canadians, but buying local is preferred. TJ's so kindly included a product sticker with preparation instructions, which I promptly discarded. I've tried the oven roasting method, but I found that microwave prep is so much faster and yields a comparable result. 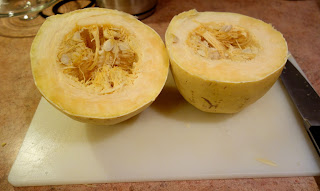 Unless you have a chainsaw, don't try hacking a raw squash in half. I scored it first, poked some holes for ventilation, and microwaved the whole squash for five minutes before cutting it width-wise, which will make for longer "noodles." 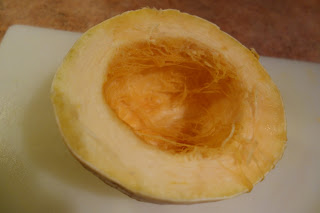 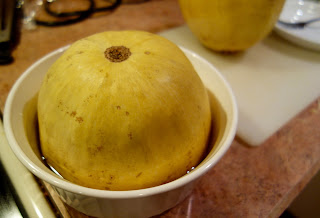 Microwave for 5 min. with an inch or so of water to create steam. If it doesn't pierce easily with a fork, stick it back in for another 2-3 minutes. Use mitts if you don't want to drop the dish and spill hot water everywhere. Forreals. 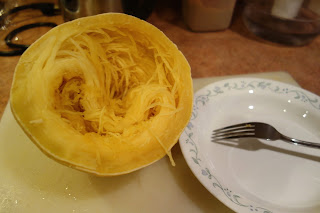 The rest is easy. Just rake the tender squash with a fork, which surrenders piles and piles of noodles** ready for consumption. 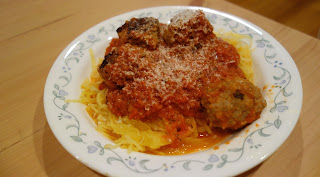 Turkey meatballs and homemade spaghetti sauce.  With parmesan of course. I made these meatballs, but TJ's has pretty tasty frozen turkey meatballs for $2.99 per bag. Served like this, A found it satisfying and diet-friendly (yes, A is on a VOLUNTARY, self-initiated diet). We finished half a spaghetti squash for one meal and saved the rest for the next night.

**No matter what anyone says, nothing can ever replace pasta. LEAVE MY BEAUTIFUL STARCHY CARBS ALONE. On the flip side, they are a healthier alternative for weeknights or whenever you want to pretend to be healthier. Just be aware that the squash produces a fair bit water, especially when microwaved, which when mixed with sauce can affect the consistency of the dish. I suppose draining the noodles or going light on the sauce would fix it. And if you want to eat this for more than two meals in a row, I advise switching up the sauce to prevent boredom. The sauce was still good, but the second time around the spaghetti squash kind of lost its appeal. The second time around, I would have eaten real pasta had I not been too lazy to cook it. :D