New! At Trader Joe's! I really try not to buy condiments. A year ago when I started this blog, I thought to myself I should instill a "one in one out" system to avoid accumulating excessive TJ products that will take up room in my Trader Joe's cupboard and suffer neglect overtime. Good intentions yes but rather unrealistic for me to carry out, hahah. Anyway, it didn't help that I sampled this salad dressing at TJ's with some crispy fish. It was intriguing enough to take home for more detailed analysis. 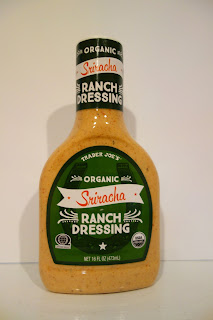 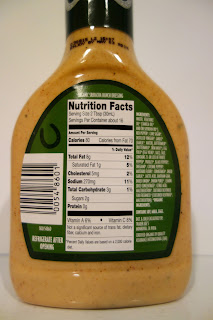 In the play Romeo & Juliet, Shakespeare famously wrote, "what's in a name?" And to that question, I say EVERYTHING (almost). A name is supposed to tell you something about what the thing is! So by invoking the name 'Sriracha,' I've approached this product with certain expectations. There's a reason why the red rooster with the green top sriracha has gone mainstream. It's spicy, sweet, a bit sour, and versatile with so many things! Naturally then, I would be expecting a collision of two wonderful things - ranch and sriracha. I still remember the day in second grade where my friends introduced me to ranch dressing in the school cafeteria. (What is it with Chinese people and their affinity for thousand island dressing?) It was eye-opening y'all.

And sadly, this my dear friends has a bit of ranch and little to no sriracha. I'm afraid it's a case of false advertising. A comparison of the two ingredient lists confirmed my suspicions. In case y'all didn't know, the top two ingredients in sriracha are chili and sugar. Yes, this dressing has sugar somewhere on the list, but I couldn't help but notice CAYENNE PEPPER. AHA. I GUESSED IT RIGHT. Cayenne provides a nice kick, but it's just not the same as sriracha. Not even close. Almost as bad as a bad knock-off. 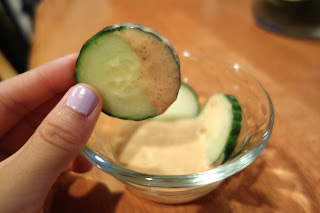 Had they named this dressing "spicy ranch," I would definitely rate this higher, because it's not a bad tasting dressing at all. I can definitely see a lot of uses for it, like an alternative for tartar sauce for instance. Make no mistake, this is SPICY, thanks to the cayenne, but that's pretty much it. Can't always taste the ranch, but it is there. There's a wee bit of smokiness I suppose but not much else. It's just really spicy. If you can't eat spicy, I do not recommend this at all. I couldn't eat more than half a cucumber slice's worth without burning my mouth. It's also weird because it looks a little like thousand island dressing, which is kind of sweet, but contains no sweetness whatsoever. I don't want to discourage people from trying this though since it's not a bad concept. It just failed to met my expectations. Unless you are sriracha-naive, this product name is seriously misleading.

In the meantime, I'm trying to conjure ways to use this up other than veggie dip. Sandwiches maybe? Spicy-not-mayo-mayo with homemade sushi? I won't be repurchasing, not because it tastes bad or anything but because you better believe homegirl is not paying for this again. Why buy when you can DIY? In fact, it would be cool to mix your own ranch and sriracha to your taste because I'm sure it would come out so deliciously addictive, like crack or pickle popcorn. Thanks TJ for the idea!

In the words of the great Ron Swanson, "people who buy things are suckers." Doh. That's me and this blog. :P

TL;DR: Trader Joe's Organic Sriracha Ranch Dressing. It's not sriracha y'all. It's spicy ranch. 5.5 out of 10.