And I should say, these have more likely than not exited the shelves at TJ's. Like a ghost. Darn seasonal products. 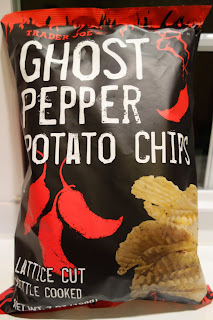 I've never heard of the ghost pepper! And for the record, it's no longer the hottest pepper in the world, but it was in 2007 when MySpace was still kind of cool). Originally from India, this was the first "superhot pepper" that apparently broke the spice world records. And apparently, it has enough punch to kill a person, but I'll need a .gov or a .edu to verify that. :P Take everything you read on the internet with a grain of salt. Or a potato chip in this case. 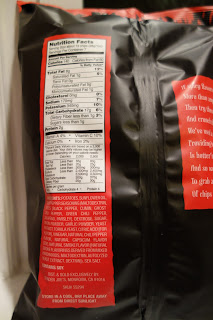 (It's a spice blend of ghost pepper, jalapeño, and green chili pepper, so no worries of death by spice anyway.) 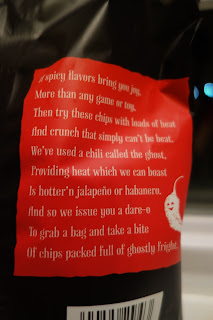 Extra points for the rhyming, even though dare-o is not a real word. 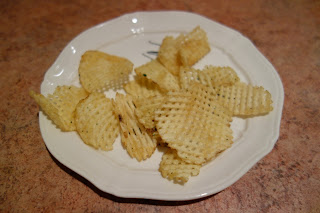 A's distilled, overly simplistic explanation: "Barbecue chips with a kick." *facepalm* He's right in some senses, but I find it a little more sophisticated than that. First, it doesn't have the typical artificial barbecue dust taste characteristic of normal barbecue chips. It's similar to typical barbecue chips but the flavors blend a little more seamlessly. They are obviously oilier than a pita or tortilla chip - but it's a POTATO chip y'all, not kale. I'm a fan of kale chips but when homegirl wants some chips, I'm must have me some REAL chips.

What I like most is the fact that the spice is delayed. I crunched for a few seconds before the spice kicked in, and this warm, almost numbing, but not quite fire-engine-whistle-blowing sensation hit the the tongue. It wasn't as spicy as I thought it would be, but if you eat too fast it gets spicy very quickly. The lattice pattern works nicely too for flavor distribution and also the substantial crunch. And it's rather pretty.  I loved the texture too - kettle-cooked but not all scrunched up and somehow still having the same texture in a classier looking lattice. How did they do it. I wish this could be replicated and applied to every other chip I've tried from TJ's. Lattice-cut cheddar horseradish chips, for instance. Wow that would be good. 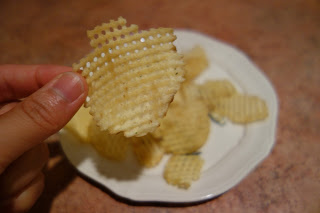 I debated whether or not to restock this at $2.29 per bag. Not expensive but somehow that extra $0.30 (compared to $1.99 for a bunch of the other snacks I already enjoy, like the sweet potato chips) was enough to make me hesitate for some reason. By the time I got around to the store, I couldn't find it anymore. You don't know what you're missing until it's gone. :(

TL;DR: Trader Joe's Ghost Pepper Potato Chips. Gone like a ghost. But what a nice delayed kick in the pants...spice level wise. Still can't get over the lattice-cut crunch. More please. 7.5 out of 10.
Seasonal Snacks Trader Joe's