on March 25, 2019
It's 2019 and we live in an age where "fusion" isn't entirely frowned upon as it once was. Great fusion happens when you take two things from different places and make something entirely new. Like the cronut. Korean tacos. Everything bagel seasoning on a slice of toast slathered with avocado. Maybe that last one isn't so much a fusion as it is a wonderful savory marriage that we've waited too long to enjoy finally. And while I'm all for culinary creativity and innovation or whatever, I think all successful fusion foods have one thing in a common. They all show respect for the ingredient by emphasizing the best part or essence of that ingredient, so that when it is mashed together with something else its distinctiveness is not lost but highlighted and complemented by the other party. Which brings me to this chop salad. Let me caffeinate. 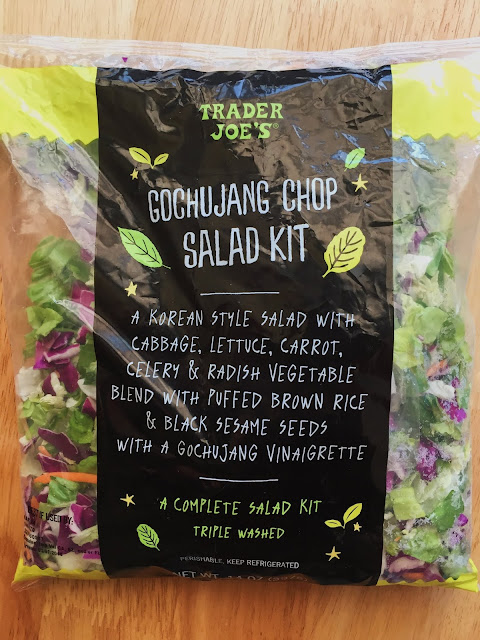 Korean style. Sigh...when you tack on that word "style," you can pretty much get away with anything and be okay because it means that Korean food is a (very) loose inspiration for this salad. Not a respectful fusion methinks but a convenient one. *Also* isn't it supposed to be called a chopped salad rather than a chop salad? Is this a lowkey reference to the generic Asian stereotype of a hiyah karate chop?**

**This reminds me of all the times at my first job where patients (male veterans), who probably don't usually see Asian faces, would often say, "wow your English is soooo good." And I would say, "thanks. Your English is good too!"

"But aren't you putting too much weight on a bagged chopped salad?" Perhaps. We go for chopped salads because they're convenient, kinda fun to eat, and healthy relative to a load of French fries. But nobody ever picked up a bagged chopped salad because they think it's the most delicious thing ever - to me, it's like a junior varsity version of a better, fresher, tastier chopped salad I might order at a restaurant. Even so, that's not necessarily a bad thing; it just means that you're starting at a lower tier which is absolutely fine for home-eating. Triple washed, ready-to-dump-into-a-bowl convenience comes at a price y'all. And while I'm not expecting something that's out-of-this-world delicious, I am expecting something that is reasonably tasty. 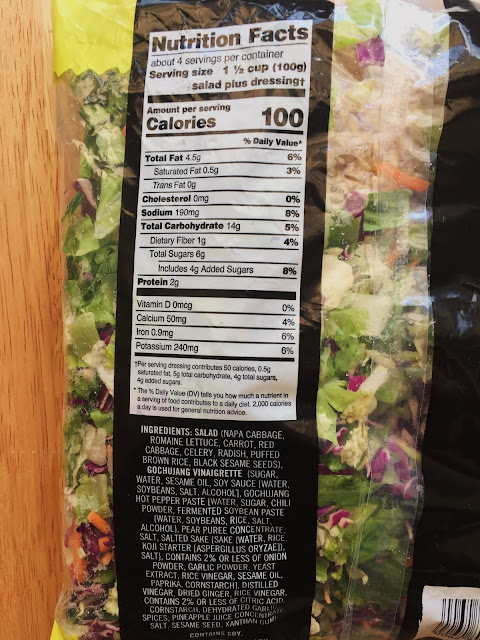 What is gochujang and what is it doing in a salad dressing? And should I feel pride as an Asian-American that gochujang is becoming so widespread that it's being discussed in the media, on podcasts, and in food magazines? Should I work on not cringing when I hear the pronunciation being absolutely butchered? Let me caffeinate.

Gochujang is one of the key pantry ingredients in a Korean pantry. It's a fermented red pepper paste that's pretty much at the base of anything spicy and saucy in Korean cuisine. Thanks college roomies for introducing it to me - my fridge now has a designated space for it. And while I use it regularly for cooking, the thought has never crossed my mind to put it in a salad dressing. No particular reason why, so this could be intriguing. Also - the ingredient list for the vinaigrette sounds reasonable. Pear puree concentrate for sweetness (so Korean. great job TJ's. :P). Sake (not really Korean but fine). Garlic, rice vinegar, soy sauce, sesame oil, ginger, pineapple juice, sesame seed. Okay, I see you TJ's. Oh and it's reasonably healthy - one serving is *only* 100 calories. Wahoo. 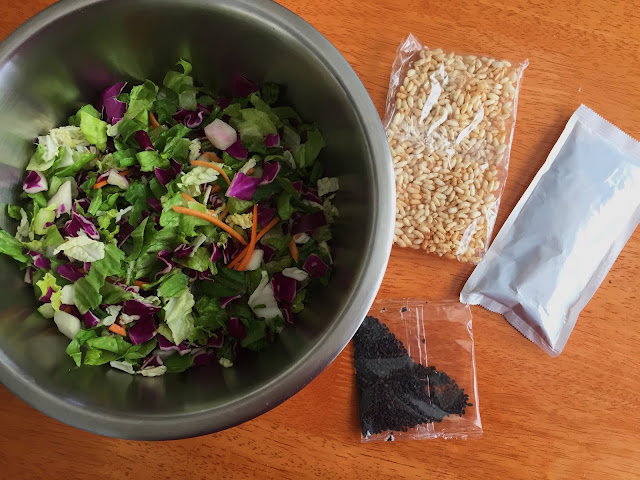 The actual salad ingredients do not really excite me much - I'm not a huge fan of raw cabbage or raw radish in a salad. It also comes with puffy brown rice (like the "Korean" version of crispy wonton strips. Which is fine cuz it's Korean style - aka license for anything to be Korean enough but not too much) and black sesame seeds. 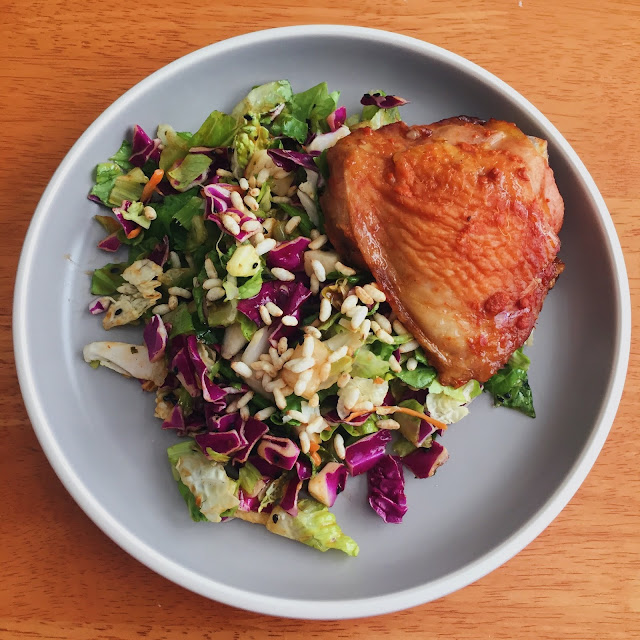 And here I've gone to painstaking lengths to make this look cooler and tastier than it actually is (with one extra dish to wash! You're welcome, internet), paired with my husband A's weeknight go-to, gochujang chicken (approximate recipe below).

1) The first bite is "oh interesting. Not bad." And then it gets old pretty fast because the arduous task of chewing paired with overwhelming bitterness from the cabbage and radish takes over. And then eating this becomes a chore.

2) The dressing tastes like a standard "Asian dressing" that you might get on a "Asian-style" (by which they mean Chinese because that's what a lot of people automatically think Asian means) chicken salad, except this one is spicier and sweeter. Also the ginger speaks louder than the gochujang IMO but other than that it still tastes like a fast food packet dressing. Which is fine because you sort of expect that in a bagged salad.

4) This probably would have tasted better if there was something acidic like a pickled radish instead of a cubed raw radish to balance this out, and unfortunately in a bagged salad you can only put the acidic ingredient in the dressing because everything to be dry. In fact, perhaps making this as a single serving, pre-packaged salad that you grab and go would have done the ingredients more justice.

6) I held this to a higher standard because it was supposed to be something different and interesting. But really, it's just another "Asian-style" salad paying loose homage to a country that isn't China, blitzed together in a dressing that isn't anything spectacular. Harsh? Hmm..maybe but I know TJ's has done better.

7) Can I just point out that the last two gochujang products (almonds and sauce) have been discontinued? Does that not say something about the effectiveness and utilization of gochujang in Trader Joe's products? Can we start treating gochujang - a lovely lovely ingredient - with a little more respect?

Husband's Gochujang Chicken - "it's not a recipe because I don't measure."
1. Preheat the oven to 375F. Mix the gochujang, soy sauce, and sugar in a bowl until it's a thick-ish sauce consistency that can adhere to the chicken. (Note that the 1:2:4 ratio of sugar, gochujang, and soy sauce is an approximation and if you're watching your sodium you can probably use half the amount of soy sauce and substitute the rest with water to get the sauce to the correct consistency. Just taste to make sure it still has flavor).

2. Line a baking sheet with foil and (optional step) spray with cooking spray. Lay the chicken pieces on the baking sheet and brush with the sauce on both sides but bake with skin-side up so it gets crispy. Bake for ~40 minutes or until cooked through.

TL;DR: Trader Joe's Gochujang Chop Salad Kit. A slightly varied version of a familiar fast food, packaged "Asian salad." But for me, a disappointing misuse of gochujang. 5 out of 10. Mantou Joe Repurchase? Does not spark joy definitely not.