on April 20, 2018
These days, in a meager attempt to eat healthier, waste less food, and generally spend less on unnecessary things, I haven't been making it around to TJ's as much (once every two weeks as opposed to multiple times a week LOL :P). So yes, I usually see things on social media before I know to look for them in store.  And when I saw this, I thought to myself, oh no. I can't believe they went there. I can't believe I'm going to spend a good amount of money for a small amount of food. Such was actually the case. 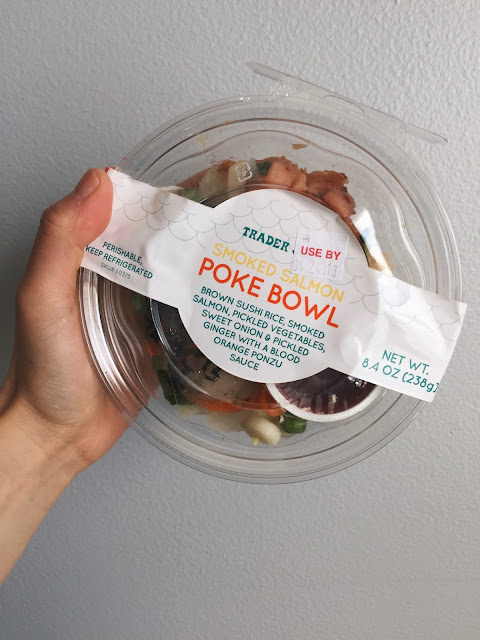 I can't say that I get too excited about poke, a traditionally Hawaiian dish of chopped/cubed fresh raw fish marinated in soy sauce and a few other things. 1) The essence of poke requires access to fresh fish or, at the very least, a solid sashimi grade fish. If your fish is meh, is it worth having? Personal question to consider, but for me I tend to pass (unless A is having a massive sushi craving where standard all-you-can-eat satisfies a quantity I could never fulfill). 2) I discovered chirashi before I discovered poke, which is not at all the same thing. Poke is raw marinated fish scattered over rice or salad (or at any trendy modern hipster poke place jumbled with wayyyy too many unnecessary ingredients) while chirashi is scattered or deconstructed sushi, simple but artfully arranged over sushi rice with some wasabi on the side. I guess you could say it's not that I don't love poke - it's just that I love chirashi so much that my relationship to poke looks like hate. :P 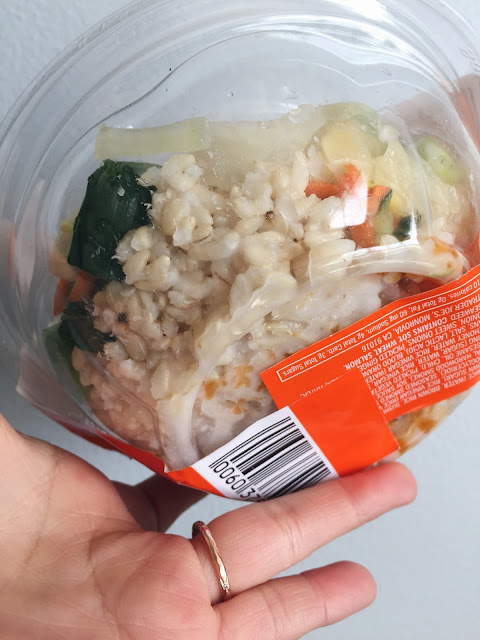 Note that this product sits in the prepared food selection. In my store, it sat between the salads and the sushis. Not a good sign. I don't anti-recommend TJ's food often, but sushi definitely falls into that category. What's the worst supermarket sushi out there? I don't know, but I'm convinced Trader Joe's sushi is down there with them. TJ's doesn't do raw fish, for good reason (it cannot sit there for multiple days y'all), and that rice? We love rice and to see rice sitting in a juice of some sort...ehhh doesn't look particularly appetizing. 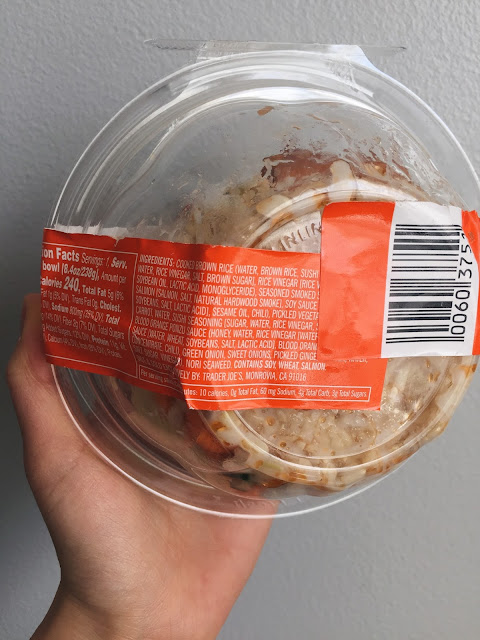 Oh yes they went there with the brown rice. Normally, I love brown rice but I think in the instance of refrigerated prepared poke bowl, I'm not sure it's a great idea. It looks like the smoked salmon is marinated in soy sauce, maybe some rice vinegar, and sugar. Also note that this is small portion - it's about one cup of food in total, which is alright if you're on a diet or can tolerate smaller portions. Probably better for you anyway. 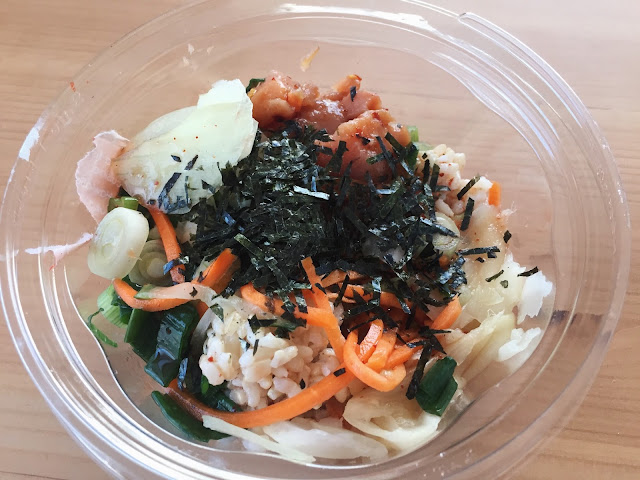 I was very skeptical as I am with any TJ's Asian food. But I used all of the ponzu sauce and all of the seaweed flakes. And how did it turn out? Not bad actually. 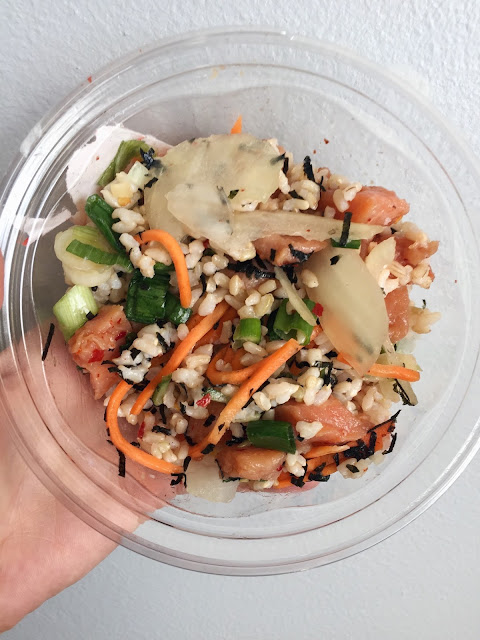 1) I wish there was more color. But they tried. The scallion is fresh. The carrots are nicely pickled.
2) It's super onion-y and ginger-y, mostly because I interpreted this poke bowl as you were supposed to mix in the ginger and eat it as part of the bowl.
3) I didn't really pay much attention to the smoked salmon to be honest. They didn't skimp out too much - it had about as many chunks one might expect to be in a poke bowl. It did taste less lox-y, so I think there was an effort made to tone down the usual smokiness/saltiness. So my guess, soy sauce, a little vinegar, and sugar is probably accurate.
4) I tasted the blood orange ponzu sauce by itself and didn't care for it much because it was too sweet. However, it was actually pretty good drizzled all over the poke bowl. Blood orange carries a tartness along with the sweet citrus. You don't taste blood orange necessarily while eating the poke bowl but it definitely balances the other acid in the sushi rice, pickled veg, and fish. It was savory and spicy - just enough of a kick without being too much. Please note though if you don't like spicy food, you might find this sauce too spicy for your taste.
5) I wish there was something crunchy. I guess the carrots were crunchy, but it would have been nice to have something else that contributed a crunch. Personal preference.
6) THE RICE was the number one problem. It wasn't soggy, and I guess the juice in the picture was vinegar/soy sauce/water? The brown rice taste wasn't immediately noticeable, but the texture was too hard. I like brown rice but when it isn't cooked well, it can be like cardboard. It wasn't like cardboard per se, but it was definitely a tad overcooked during preparation and over-refrigerated.  Alas, rice hardens when it's refrigerated. Can you blame dear old Joe?

With that said, this wasn't an abysmal failure. Far from it. It's pretty decent tasting and thought-through for a Hawaiian-INSPIRED (inspired is key. This ain't the real deal y'all) dish. If you want to spend $5.99 on a 8.4oz imitation poke bowl, you have my blessing. It is at least half the price of anything you can get in NYC (that yes is more expensive but gives you moderately fresher fish in a slightly bigger portion). I, however, will not be repurchasing for the two reasons I love chirashi - the fish and the rice.