on December 05, 2017
Today's post features a frozen meal that appeals to what I perceive as the typical millenial TJ's patron - one who desires homecooked-ish meals with minimal work. It's not that we're lazy (although depends who you ask :P). It's that we're busy, life is busy, and it's kind of hard to cook for one. Or two. And while meal prepping is nice in theory and can be aesthetically pleasing on social media, it takes work and a commitment to plan ahead. And if it's one thing millenials tend to dislike - it's commitment. :P 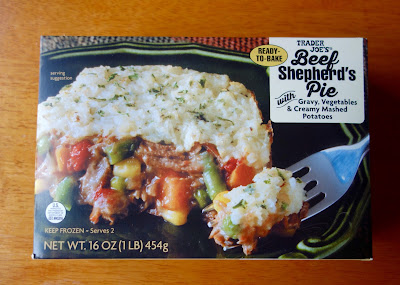 I found myself wandering the aisles looking for something that I could heat up for dinner that wasn't frozen dumplings. As much as we rely on TJ's frozen potstickers in a pinch, it's not something we necessarily want to eat every night. 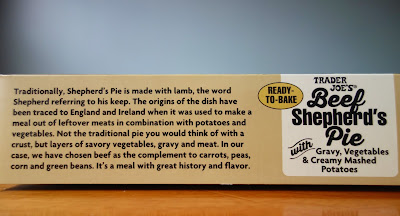 I gravitated toward shepherd's pie, probably because of all the BBC Bake-off (I lied. Bake-Off is no longer on BBC but "Channel One") and cooking shows I've been watching recently. And well, Christmas. Shepherds. Wise Men. Jesus. Plus, this sounds like the perfect comfort food for a cloudy, just drab day. 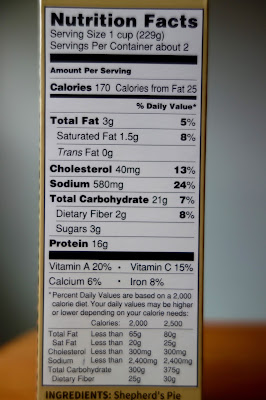 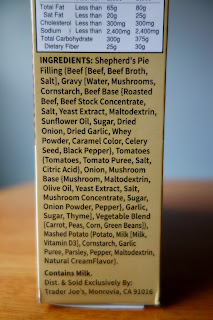 Two servings (we'll see about that). A less-ungodly-but probably-still-ungodly amount of sodium. But nothing else too suspicious in the ingredients list and a fair bit of protein. Alright. Not terrible. 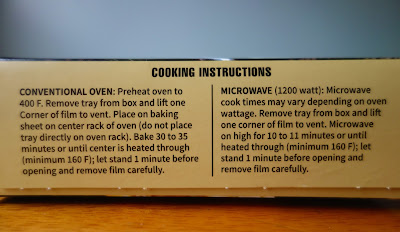 For once, I went through the trouble of using a conventional oven to prep this, thinking more effort would mean better pay-off. Ehhhhhhhhh...questionable. 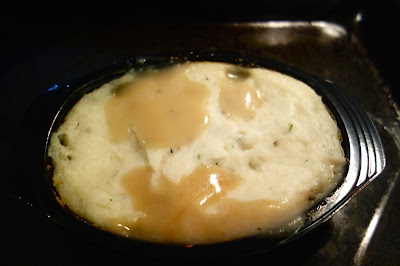 If this picture and the following one look underwhelming, it's because I've taken extraordinary lengths to make it so. You see, I've done exactly the opposite of what is expected of a food blog (though to be fair, this is a TJ's blog through and through, not a food blog in the traditional sense) and any social media platform for that matter. Instead of styling the photo and capturing it with the best natural lighting possible, I've left it in the plastic tray under the dim microwave oven light (yes we're working on the lack of light situation in our kitchen), not only for my convenience, but also to emphasize how underwhelming and how utterly disappointing this entree is, if you can call it an entree. The serving size is a lot smaller in person as it usually is with TJ's frozen meals. 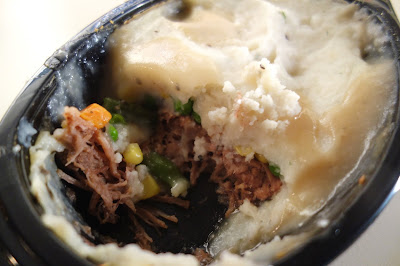 You know how you can sometimes take random leftovers in your fridge, throw it into a bowl, heat it up, and call it dinner? Well, this shepherd's pie seems more like that. It's leftovers thrown together rather than a cohesive pie. Except worse. But to be fair, I don't know about what the leftovers are like at your house, but at mine they are fairly okay. (And if they are leftovers that hail from my mother-in-law's house, they are more than okay. :D)

The beef reminds me of a mediocre slab of cheap/tough meat that you use in a Pinterest slow-cooker recipe promising tender, melt-in-your-mouth protein that in reality often ends up dry. Not much flavor going on, and if I'm being really mean, it combines the texture of stringy pulled pork and dry tuna from a can. Not great but edible. The veggies taste like frozen veggies without any effort put in to make them not taste like microwaved frozen veggies. Underwhelming. And while I think a decent mashed potato on top would have made this a bit more palatable, I have to say this is one of the worst pre-prepped mashed potatoes I've had in a while. In fact, I think I've had better airplane food mashed potatoes. It tastes like instant. Now I grew up eating instant mashed potatoes, and it was pretty good as long as you prepared it correctly with the right amount of seasoning and milk to achieve the optimal whipped texture. This though is quite thin and flavorless, although occasionally you can taste a bit of black pepper. And while there is a gravy on top, that too doesn't really have flavor either.

I had A try this first and thought his comments ("weird mashed potatoes," "tastes like frozen veggies," and "really underwhelming") were a bit critical. And yes, we have to account for it being prime Thanksgiving/Christmas/holiday celebration potluck season, which means I have a subconsciously higher standard for this genre of food. But tasting this knocked out most of my optimism for a neutral, if not favorable review. Boston Market is definitely better. If Boston Market is a 5.5 or a 6 on my TJ's rating scale (decent, not something I gravitate toward but would repurchase), this is definitely way lower. Yes, Boston Market costs more than this $4.49 freezer meal, but you definitely get more for your money.

I should also say that this is so mediocre that to me it doesn't matter if this entree is hot or room temperature because it tastes about the same. Meh.

TL;DR: Trader Joe's Beef Shepherd's Pie. Eat leftovers. Or airplane food. Or Boston Market. All of those choices are better. 3 out of 10.
Frozen Seasonal Trader Joe's