on November 15, 2017
I recently drove past a house completely decked out in Christmas lights. I love Christmas and all but is that really necessary? Anyway, I thought I'd throw in one last pumpkin review. Don't believe the mass retailers out for your holiday money - it's technically still pumpkin season. 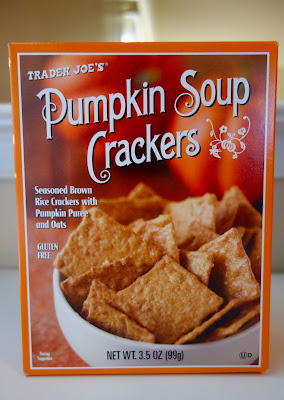 I really didn't know what to make of these. Are these pumpkin flavored crackers intended to be consumed with soup or pumpkin soup-flavored crackers? After having four boxes of these crackers, I'm fairly certain these are the latter. 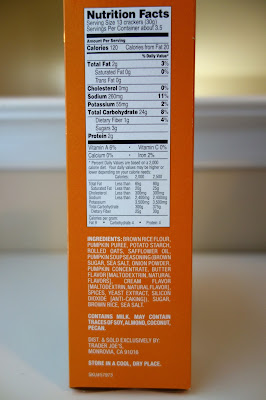 I know someone (*cough* A cough*) who flinches at the sound of brown rice, but in cracker form it should be fairly palatable for most people.  Also, because pumpkin spice has been so so aggressively pushed in our faces, I have an instant recoil towards anything pumpkin related because my brain automatically assumes something "pumpkin" is "pumpkin spice." Which is why I avoided these crackers until this year. Good to know that the typical pumpkin spice spices are absent here. 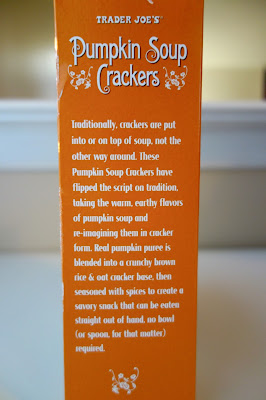 Savory, crunchy, and right up my alley. 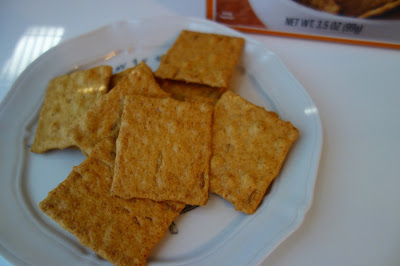 It's a very very familiar taste, and after four boxes I still haven't figured out where I've had these before. These are definitely savory crackers with a slight sweetness, sort of like Wheat Thins. They do taste onion-y and harvest-y for lack of a better description. It has the light crispness that I enjoy about rice crackers, which makes them completely snackable and addicting. However, I personally don't like the idea of dipping rice crackers in soup from a purely textural standpoint. Starchy crackers hold up better and disintegrate into something tastier. I'm okay with snacking on these right out of the box. Also, because they are so generously seasoned, I don't think they go well with cheeses or dips. That said, I think you might come across issues with seasoning distribution. I had one box where some crackers were doused in seasoning whereas others had a light sprinkling. More is not necessarily better in that case.