on October 10, 2017
Trips to most stores take a long time for me because I like to say hi to everything in the store, and of course TJ's is no exception. This wasn't pushed in my face, like little pumpkins and that awesome sauce, nor did I see it lurking about the pages of the Fearless Flyer. Apparently, this gnocchi has been a seasonal item for several years -- but my thinking is if the advertising isn't like, "tadaaaaaa it's baaaaack!" then it's probably just...okay. *Shrug* 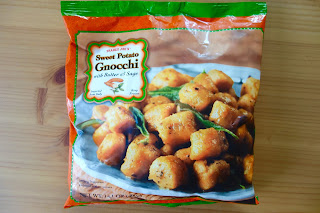 Gnocchi are basically potato dumplings. There's debate about what constitutes proper gnocchi (the Italians have a lot to say about that), and making a proper one that isn't too firm or gummy can be tricky. To date, the best gnocchi I've had has been light and airy but still with a tender chew. That delicate texture is essential for holding up a rich sauce; otherwise you just end up having heaviness upon heaviness, which inevitably ends in a food coma. 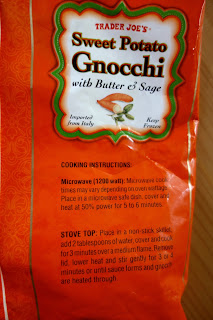 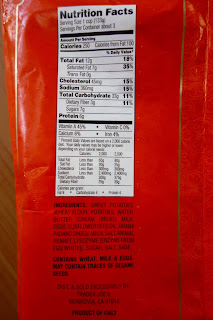 Made in Italy. I automatically raised the bar for this. 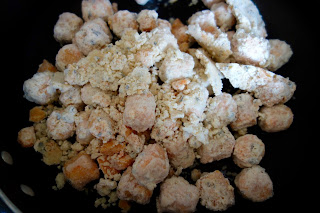 Never judge a frozen food by the way that it appears when you take it out of the package. Yes, it doesn't look that appealing. Heat it up first and then see. Also - they've changed the cooking instructions as well as packaging compared to previous years. Previous editions have called for a lightly oiled pan instead of two tablespoons of water. I let the gnocchi heat up without stirring much, and they didn't turn to mush. 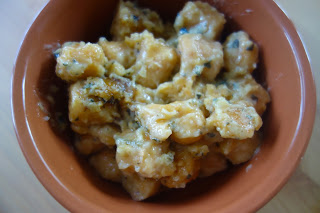 Even after you heat it up, it didn't LOOK the most appetizing but it certainly smelled fragrant. The buttery sage sauce smelled to me like fall, which I felt was a complementary flavor for the sweet potato. If I never had gnocchi before, I think I would have liked these more than I currently do. They aren't bad; they just aren't amazing. Most of my issues with this (and at least half of the things I review on this blog) are textural - which goes back to all the things that affect the texture of gnocchi (the type of potato used, the flour, the moisture content, the technique, etc). True, they could have done worse. It could be gummy or mushy or firm as rocks. But it's not. It is pillow-y and chewy without being TOO heavily doughy; but it's kind of like how hospital pillows work. Is it a pillow? Yes. Does it get the job done as far as providing comfort? Yes. But would I ever be tempted to steal a pillow and use it on my own bed at home for comfort's sake? Noooooo nooooooo.

I did enjoy the fact that these were made of sweet potato; the sweetness served as a nice backdrop for the sauce, but I'm thinking maybe the sweet potato itself was responsible for the textural plateau - not quite bad enough to be awful (which is a good thing) but not quite awesome enough to say, "wow. Now THAT is gnocchi." A did not like the earthiness of the sage, whereas I liked it. The sauce wasn't too salty or buttery. That too wasn't complex or special enough to keep us going back for more. Needless to say, we were both tired of eating it after a while.

The price point at $2.99 isn't bad at all for what it is. Personally I would not repurchase, but it's not a bad pick for fall.

TL;DR: Trader Joe's Sweet Potato Gnocchi. Run-of-the-mill gnocchi with sweet potato and a buttery sage sauce. It's aiite. 5.5 out of 10.