on May 11, 2017
This is one of those foods that elicits one of two distinct responses from most people. "YAAAAAAAS. LIFE." Or if you can't stand the fermentedness, the sourness, or the spice - it's a *stink face.* I'm trying not support the deterioration of English language to mere emojis, but c'mon. Stink face is pretty darn appropriate for some. And while yes I like to categorize people and things, I acknowledge that you could be indifferent. Or uninitiated. Either way, you can't deny its presence. This is the lifestuff stuff of an entire people.

While there are many many many types of kimchi, TJ's went for the classic. Napa cabbage. Actually, I've had it before. Back then the packaging was a little different. 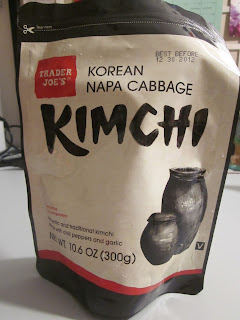 Why you would package kimchi in a resealable foil packet, I know not why. Needless to say, they removed this from the shelves not long after. Good riddance. I think the glass jar contains the smell better. :D 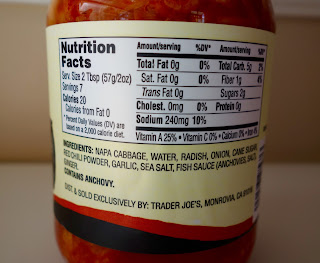 It has been five years since I last tried TJ's kimchi. Might be my imagination, but I think this is a slightly different (and better!) product, even though it might be the same supplier. No MSG, which I like. A bunch of cheaper store-bought kimchis contain MSG and other funky ingredients. The sodium count is typical for kimchi - salting is an essential step of the fermentation process (draws out the water and helps with the pickling). 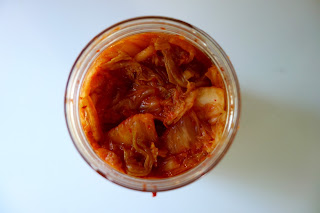 This picture means that A had nothing to do with this review. He can't stand the fermentedness. I did, however, consult my Korean neighbor. HI. :D 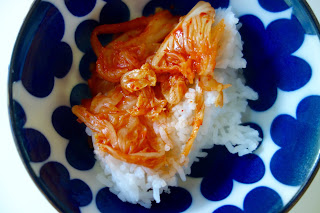 For a premade, store-bought kimchi, this is pretty good. It's mild, clean tasting, not very spicy at all. Not too sour either. According to my neighbor, it lacks something sweet (grated apple or something like that) to round out the flavor - but unless you eat kimchi like everyday it would be hard to tell the difference. Good with rice. Probably decent in other preparations too. The price isn't terrible ($4.49 for a 14oz jar), especially for a store-bought kimchi sans preservatives or whatever. Still cheaper at a Korean or Asian grocery store, but not bad for bringing kimchi to the masses. This I'd consider for repurchase in a pinch.