on March 23, 2017
This post represents all the things I have done instead of pack for the move. Tomorrow. (A and I are moving across town. Away from Trader Joe's. Minor detail. The shock hasn't hit me yet. Ask me in a month. :P) Wash the dishwasher. Do tricep pushups. Read How to Hygge. Have a cup of coffee. Ponder organic pea soup. Anything but pack. 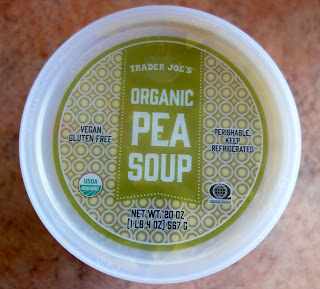 I associate pea soup with grandmas and babies. Why? I never had pea soup growing up, so it's considerably "foreign" to me. It resembles baby food - liquid-y with an unnatural murky looking pale green that to me always seems to be a few minutes from an emetic episode. And because once I saw a grandma ask the store manager where she could find this delicious canned pea soup that TJ's carries (or used to carry? She had trouble finding it). So from then on, I considered this a grandma food. Which is fine...I consider myself a grandma at times too. :P 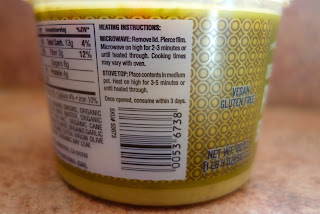 I sampled this a few weeks ago and picked it up, considering it was still ridiculously freezing outside and my fridge was bare. It helped that the samples were piping hot and I was hungry. Never shop on an empty stomach. Yet I do it. 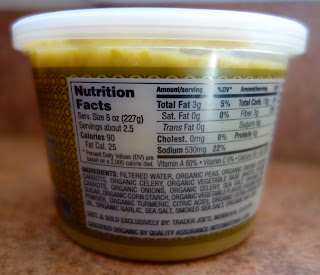 A sizable amount of sodium. To be expected. But everything is organic if that assuages your conscience. 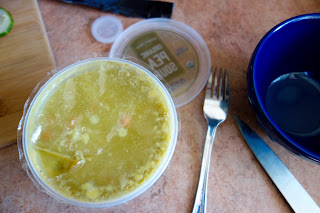 I really struggled to peel off the plastic film. Was it me or the packaging? And I nuked it in the plastic container. I hear my mother mumbling something about chemicals leaching into the food and causing cancer... 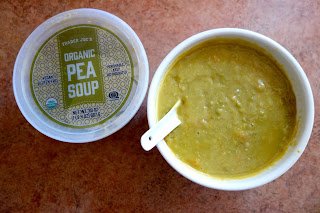 This Anthro latte bowl basically held all 2.5 servings of this soup. I would never feed this to A. It has no meat, it's composed of peas, and it looks so attractive. He has nothing personal against vegans, but he finds vegan food rather offensive. *eyeroll*

They've definitely used a good mirepoix (onions, celery, carrots that have been browned and simmered in the stock) as the base, which has resulted in a robust flavor or about as robust you can get without meat. The texture is surprisingly thick and creamy but not entirely smooth, which I find hearty and satisfying. There's enough flavor for me to identify this as pea soup, moderately fresh but not overwhelming or gross. I only wish there was less salt. It's still edible but definitely too salty for me. Even still, I'd probably repurchase this one day when I'm stuck craving soup with neither the means nor motivation to cook for myself. $3.99 for this container is pretty comparable to any supermarket, deli, or cafeteria price. Pair this soup piping hot with some crusty bread and you've got yourself a quick and reasonably satisfying light meal.

And now back to packing. :P

TL;DR: Trader Joe's Organic Pea Soup. On the salty side like many prepared soups, but I think Grandma might still go for this. 6 out of 10.
Gluten-Free Soup Trader Joe's Vegan