on February 09, 2017
I used to hate the idea of boring. Where's the spice? The adventure? Feelings are great and all but like the icing on top of the cake, they can be fluffy at times and ultimately need to be founded on something a bit more solid if you're going to be in it for the long haul. Perhaps I'm becoming more grandma or that for me, simple acts of service go a much longer way than a box of chocolates. Life is like a box of chocolates and you never know what you gonna get. Which is great. We need that. But sometimes we need life to be like a bowl of oatmeal where you know exactly what you gonna get. Especially after that disaster. 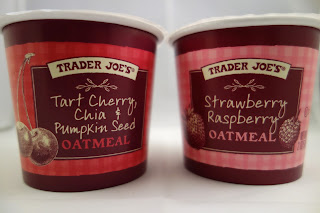 Oatmeal is that slow and steady food that few people ever really get excited about. What's there to get excited about? It's oatmeal. I lump it into the same category as "laundry." How exciting. Whatever but sorta necessary I guess. These oatmeal cups are portable, new, and incidentally valentine's colored. They run $1.29 per cup (not terribly expensive. not cheap either..I can get a larger bowl of oatmeal at the hospital cafeteria for $1) and will probably appeal most to health conscious, busy people. The prep requires nuking or pouring in some boiling water and letting it sit, like cup noodles. 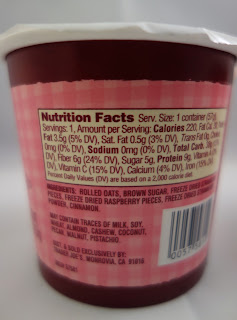 This first one is strawberry raspberry. 9g of protein is pretty impressive for pre-packaged oatmeal. 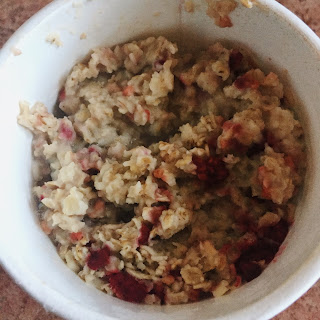 Mind you, this TJ's oatmeal has less added sugar compared to other supermarket alternatives. It doesn't taste bad, but it's terribly boring. The freeze dried fruits don't really add any flavor to this at all, and I can barely detect any actual raspberry or strawberry flavor. All it adds is coloring. I found myself reaching for extra raisins to give this oatmeal a little bit of life. I get that freeze dried fruits are getting to be all the rage, precisely because of the no added sugars, but c'mon. It's about as exciting as cardboard. 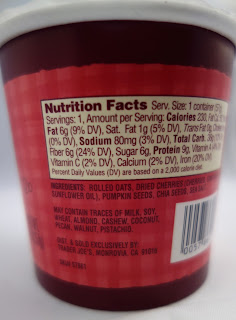 This tart cherry, chia, and pumpkin seed has a wee bit more sugar. Personally, I prefer this one over the freeze dried strawberry/raspberry one. It resembles something I might throw together in my own kitchen. In fact, it is literally the pre-packaged version of what I've been having for breakfast lately, except I use craisins since those are cheaper than cherries. The tartness of the cherry cuts through the overall plain oatmeal while the pumpkin seeds add a little bit of saltiness and crunch. Chia seeds bloat a little when soaked in liquid and become a little jelly-like (hence chia pudding), which psychologically for me makes me think I will stay fuller for longer. 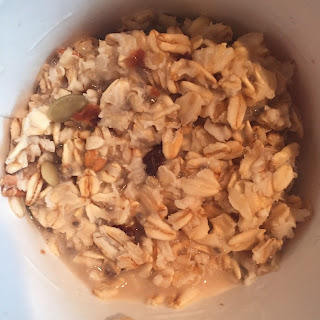 Would I rather have something more exciting like smoked salmon and cream cheese on a bagel,  french toast, or bacon and eggs? You bet. But I need the boring breakfast to balance out the unhealthy snacks I probably devour later.  Balance y'all. Balance.

Personally, I probably wouldn't repurchase again unless I foresaw a travel situation or other situation where $1.29 on a 8 oz (?) cup of oatmeal would save me a little more money than the alternative. But if I had to, I'd go for the tart cherry over the freeze dried one.