on February 17, 2017
The moment I laid eyes on these new chips, I knew I had to try them. Not because I would like them (far from it. I'll take it on a sweet bun or dessert or something but I can't stand that sweet savory combo), but there was something strangely familiar.  Yes, it's new to TJ's but where had I seen them before? 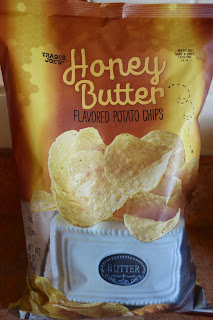 And then it dawned on me...I think the Koreans got to it first. Massively so. A quick google search revealed a HONEY BUTTER CHIP CONSPIRACY (that I vaguely vaguely remember seeing/hearing about from my Korean friends). In fact, I'm pretty sure I've seen them at H-Mart and that my college roommate had me try some. And yes, I didn't like them precisely because I like my chips salty and crunchy. 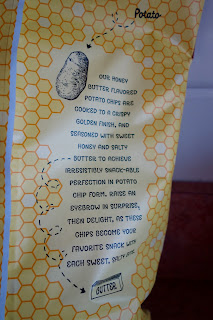 Still, if something is "objectively" good I like to think that I have a palate distinguished enough to recognize and appreciate that.  Aren't our tastes subject to our individual likes and dislikes? How can a product be "objectively good?" Even though what I write on this blog is supposed to lean facetious, perhaps you can take my opinion with a grain of salt, particularly if your tastebuds lean sweet (y'all know I ain't about that life). But even though I have certain preferences, I think it's a good exercise to understand why something might be appealing to some but not others, rather than demonize everything that doesn't meet my personal standard. I suppose that goes for politics too. :P

(Unless, that is, it deserves to be slammed. I went to get a refund for the honey walnut shrimp. The store manager was convinced I got a bad batch and that I should give it another month or so for my repulsion to subside and then try it again. I'll consider it. Still skeptical though.) 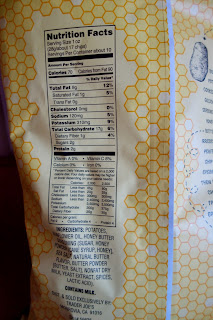 BTW that 70 calorie per serving is giving a lot of people some false reassurance. Word on the street is that the calorie info on this particular batch was misprinted. Although my TJ's doesn't have misprint flyers up, apparently these chips actually come out to 150 cal per serving. 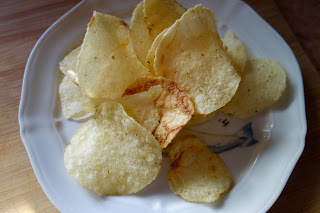 As suspected, I personally don't like them, but I can see why some people would. First of all, that butter flavor is STRONG. My butter loving friend disagrees and says there's just enough but not too much. I think our baseline affinity (or lack thereof) for butter accounts for the difference in opinion. When you have pancakes or waffles, do you dollop or use a small pat? (I go for a small pat, if any at all) Anyway, these chips have the creamy, bright flavor going, which I wouldn't personally mind if it were topped off with a savory seasoning. The sweetness isn't overbearing at all. I think it's just right, although to me it tastes kinda generically sweet and you can't really tell for sure whether or not it's honey. It would have been nice to have a more distinctive honey flavor. There's plenty of crunch here, although it would be better if they were kettle cooked. My friend agrees. I haven't had a kettle cooked chip that I didn't like..but if these came kettle cooked, they'd probably be the first.

$1.99 per bag. Probably joining the permanent snack line-up at TJ's.

TL;DR: Trader Joe's Honey Butter Flavored Potato Chips. In case that snack black market still has those butter chips under firm grip, try these, my honey butter loving friends. 5 out of 10 for me. But if you like honey butter, I'll concede to a 6.5 out of 10.