on January 03, 2017
Happy New Year! Did you have a nice holiday? A holiday break? A holiday of working? Are you begrudgingly starting a new diet in hopes of fulfilling a New Year's resolution? If so, good luck, because this post is not for you. But no worries, I'll get back to posting about healthy things and foods that move your bowels very soon. :P 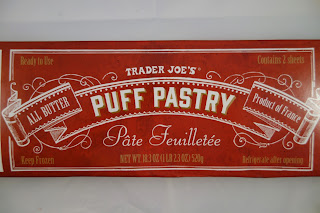 This is a product I tried toward the end of 2016. I would be remiss to not give it a fair shoutout, because it is a HIDDEN GEM. I thought maybe putting it in all caps would help uncover it for y'all. I picked this up ages ago, and it's been hanging out in my freezer. I was in need of frozen puff pastry to use for apple dumplings (minus the salted maple caramel. too lazy to make that), which I picked up at my neighborhood non-TJ's grocery store --only to KICK MYSELF that TJ's had it in stock and $2 CHEAPER. (Ok, maybe it was $1 cheaper. Doesn't matter. The point is that TJ's had a comparable item at a lower price. One dollar is one dollar y'all).

What is puff pastry? It's pastry that puffs up! Not a valid definition. It's a pastry dough with alternating layers of butter and dough. When baked, the layers puff up into this delicate light, buttery, flaky pastry that is utterly delectable - the perfect vehicle for a delicious filling. You can make it yourself. Or you can make the rough-puff (ruff puff as I like to call it), which is the cheater's shortcut version. Which I made once, and it still took 3.5 hours. Or you can plop down $3.99 and get a box at TJ's. Except my TJ's isn't carrying it at the moment, and I doubt it is available year round. Boo.

This is a product of FRANCE. AKA the land of better carbs and cheese. Croissants. Baguettes. Pastries. Oh my. I have never been, but I've seen enough pictures and have read enough books to know the French people eat loads of that deliciousness and are not nearly as fat as the Americans. Butter is not the enemy here people - it is our blessed friend. 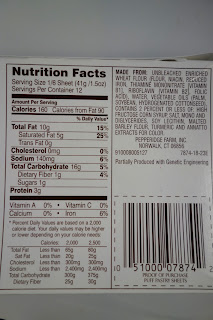 This is the nutrition facts of the other box of puff pastry that I picked up. I put it here for comparison's sake. Dang that's a long ingredient list with evil things like hydrogenated oil and high fructose corn syrup. Translation: they used shortening. Not butter.

Look those are all ingredients I have in my kitchen! Wheat flour, water, butter, salt, and vinegar! Cheaper AND better. 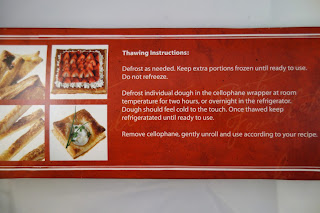 Follow the directions or suffer the consequences. It's also good to do extra homework. Even though it's store-bought, you gotta give this dough some TLC (scroll to "How to Properly Handle Puff Pastry) if you want it to be your friend. 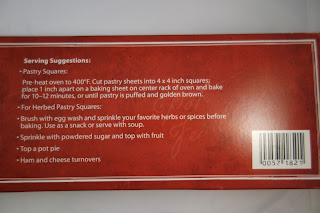 Now what to do? You can do anything really for impressing friends, family, office coworkers...puff pastry makes everything fancy schmancy and helps you recreate appetizers that you would otherwise purchase. As for me, I made curry puffs. 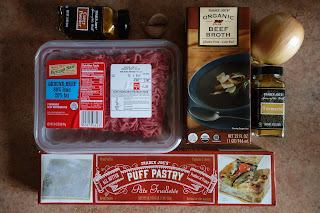 Incidentally, I got most of my ingredients from TJ's, since turmeric is practically a health food. :P 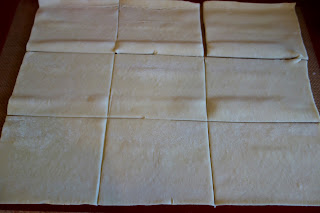 Except that this puff pastry sheet didn't come in a perfect square so I had trouble cutting it into 9 squares. Some of them were a bit more rectangular that I would have liked. Handle with care. Don't overhandle. 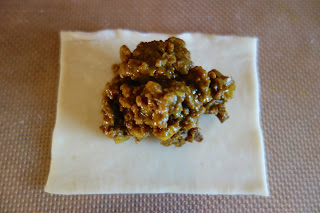 I tried to stuff them with as much filling as possible. If you're going to stuff something, you gotta stuff it like you mean it. 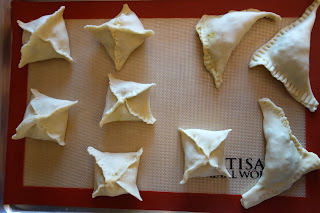 The recipe I followed said to fold into neat triangles. The pastry squares that were more rectangular were harder to fold into squares. I felt like an elementary schooler trying to do origami and struggled to match up the corners. I also did my very best to seal the edges, but I think this was more user-error than product fault. Some of the dough just refused to stick together! It probably goes back to how you thaw the dough, handle the dough, etc. 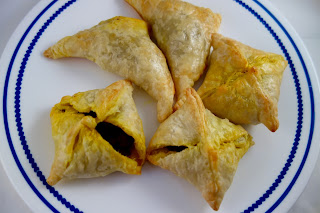 But they still turned out well! Most of the pastries gaped open, but no filling was lost. Next time, I would probably make everything into triangles rather than little temple thingys, because the triangles were easier to seal. But hopefully, this helps give an idea of how to use this puff pastry because seriously, it is such good value for your money. Literally. According to the internet, there's only two other nationally available brands of puff pastry on the market. And that made-with-real-butter brand is TRIPLE the price. I should have stocked up while I had the chance. Regrets regrets.

And how can I post a baking-related post without reference to GBBO? I'm telling you..while we're making cookies (I am not hating on cookies. In fact, that's all I've been baking lately. We could just branch out a little.) here in America, the British are smashing their bakes out of the park. Not actual smashing though. That's how they get deformed.

TL;DR: Trader Joe's Puff Pastry. High quality, FRENCH shortcut to buttery, flaky bites of deliciousness to take you from pleb to fab. If only that rhymed. 8.5 out of 10.