on October 01, 2016
We have arrived at my favorite month of the year. The foliage. The crisp autumn air. The pumpkin spice-less Trader Joe's stuff. How thrilling! 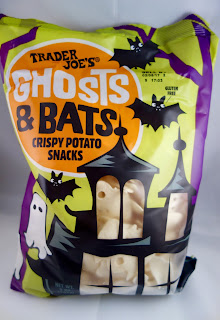 THE PACKAGING THOUGH! SO CUTE. The only reason I haven't reviewed this sooner is A vetoed me picking these up in California. No way were we going to hike up to Twin Peaks carrying a ginormous bag of TJ snacks (translation: A did not want to hike while carrying my TJ snacks :P). 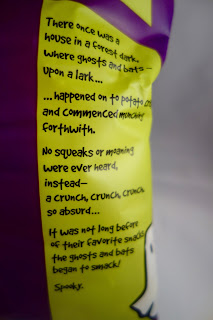 And they tried to make a cute little rhyme! That doesn't make much sense! I'm sold. 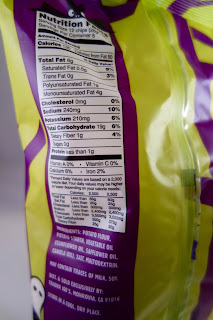 Okay, confession. Up until now I've only said nice things about these snacks, but truthfully when I picked them up and looked at the back, I thought to myself, "Baked Lays." That's not necessarily a bad thing, but it means less crunch. Less fun. But extra points for doing ghosts and bats, rather than pumpkin. I think I might like pumpkins for maybe a week, tolerate them for another week and a half, and pine for them to go after that. 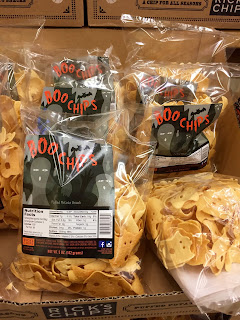 Side note: I found these familiar snacks in an organic grocery store in California. Boo Chips. Same shape. More toasted look. I didn't buy them, but I'll bet they taste the same too. Only difference is the color and the price ($1.99 at TJ's vs $3.49 at the organic grocer). The only thing I like more than spending money is saving it. 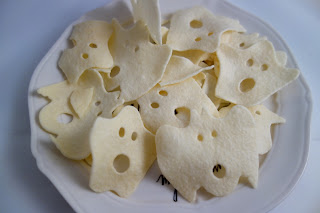 I couldn't find the bats at first, but then I realized they couldn't all be ghosts. The things I thought were ghosts are actually the bats, and the star-shaped things are the ghosts. I think I've seen them in some Mario Nintendo game. And actually, they didn't turn out to be Baked Lays at all! I was totally thrown off, and yet there was something very familiar about them. They tasted more like the potato-flavored veggie chip or veggie straw, except thinner, more crisp, and airy.

No crazy, mind-dazzling flavors here, but certainly cute and kid-friendly.