on August 26, 2016
There was once a time where I found myself in scintillating discussions about vitamin toxicity, the most nutritionally balanced breakfast, and the monounsaturated vs polyunsaturated fat content of certain cooking oils. Before weekly community group. Because when you find yourself socially awkward and don't know what else to talk about, you talk about what you know. Which at the time was food and nutrition. This product reminds me of those good ole days. 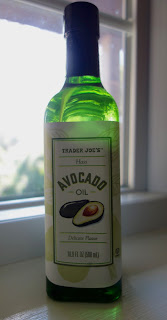 Needless to say, my nutrition knowledge has atrophied, much like my finger dexterity from years of piano playing. It's an age-old case of "use it or lose it." Perhaps my inner ahjumma will revive it one day, but for now it's my inner mainstream hipster that calls the shots. Which is why I picked up this avocado oil, because coconut oil is so five years ago. :P

This is apparently the new cool kid on the block, so cool that the TJ's cashier asked me why so many people were buying this. Yes, it's full of the wonderful monounsaturated fat that can help lower cholesterol blah blah blah. But unlike olive oil, especially the extra virgin variety, avocado oil has a much higher smoke point, which means it can be used for actual cooking and roasting. And then I proceeded to launch into a semi-rant about how heat breaks down the good cis-bonds such that when the oil cools, trans-bonds form instead (really sorry if I've made any chemists, organic chemists, food scientists writhe with my super unsophisticated explanation. It's been donkey years since I've taken any chemistry). This is the part where A would have said, "hey MIDDLE CHILD! SHHHHHHHH." Husbands are great. Really. 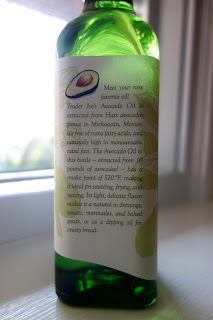 Ten pounds of avocado for per bottle of oil. Impressive. But also expensive. This baby will cost you $8.99 per bottle. I'm sure Costco, where the cost is low, offers this at a better price. 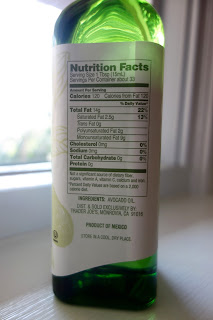 9g of monounsaturated fat is supposed to impress me, I think.

I've used this oil for a couple of weeks now for cooking and making salad dressing. Has it made any palpable difference? Ehh..not really.  I probably would not be able to distinguish this from a canola oil  in a blind taste test. It has a really neutral flavor. Is there a grassy, slightly avocado flavor? Perhaps, if I close my eyes and imagine that I'm frolicking through a field of avocados. Maybe. I kind of prefer the fruity undertone that extra virgin olive oil gives to my dressings, but can you really taste the difference? Meh.

It's nice. It's trendy. It'll cost you a pretty penny. Would I buy it again? When I think of all the avocados that were sacrificed for this one bottle of oil, I think I'd rather shell out on a jar of almond butter instead.