Vegetables in a can. Whooooo..how exciting. Probably not something I would have picked up from the shelves, but HEY sometimes TJs purposely samples products that aren't selling well that you would otherwise overlook. 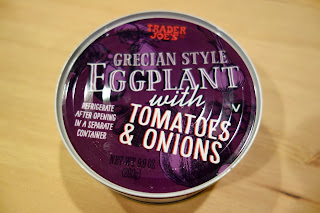 Is this an actual thing in Greece? I wonder. 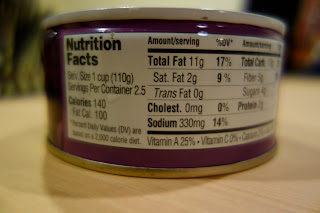 The eggplants are bathing in oil. Yum. 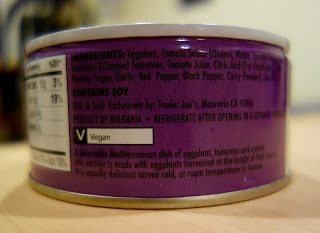 Grecian style but made in Bulgaria. And vegan. 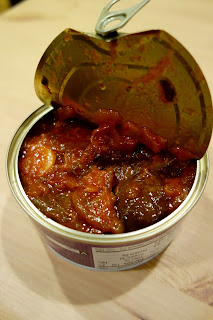 How appetizing. At least it looks better than cat food. 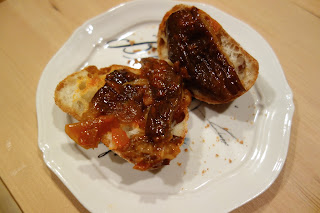 Took me three months or so from purchase to actually crack it open, which tells you how excited I was to eat this. I served it on some baguette slices. A hates eggplant, so he was unable to give a helpful opinion on this matter. Very sweet and tomato-y, mushy, and oily. Sure there's some pieces of onion in there, and it would have been nice with some roasted red pepper, but what gives? Honestly, it reminds me of a Mediterranean version of the canned foods my mom eats with congee (usually pickles, sardines, other unrecognizable but salty foods). The baguette thing got old for me. It would have been weird in congee. I ate it eventually with spaghetti squash and realized there's a reason why people leave out eggplant from spaghetti sauce (just didn't complement my sauce or my meatballs even though it was tomato-based).

You're supposed to serve this as an appetizer, but it's not the prettiest food in the world. It doesn't really resemble a baba ganoush at all. It's too heavy for a chip or a cracker and definitely needs a hefty piece of bread to transport this to your mouth. Can't say it's the most delectable form of eggplant but not the worst either. It's aiite I guess. *shrug*

$1.29 per can. I suppose party appetizers could do worse.

TL;DR: Trader Joe's Grecian Style Eggplant with Tomatoes & Onions. Vegetarian appetizer in a can for your next party. How scintillating. 5 out of 10.
Appetizers Trader Joe's Vegan