on December 20, 2018
These days I've been attempting to punctuate indulgent holiday treats with somewhat normal meals. Normal meaning simple food that tastes good and comes together easily, an absolute necessity especially when sleep-deprived and or hangry. For me, it's a basic formula. Starch (bread, rice, or pasta/noodles) + protein + something vegetable-leaning. I ended up buying a bread I thought I would willingly eat without devouring like a madman in a matter of a few days. In other words, when you're trying to eat sensibly, get things that you like to eat but not that much. :P 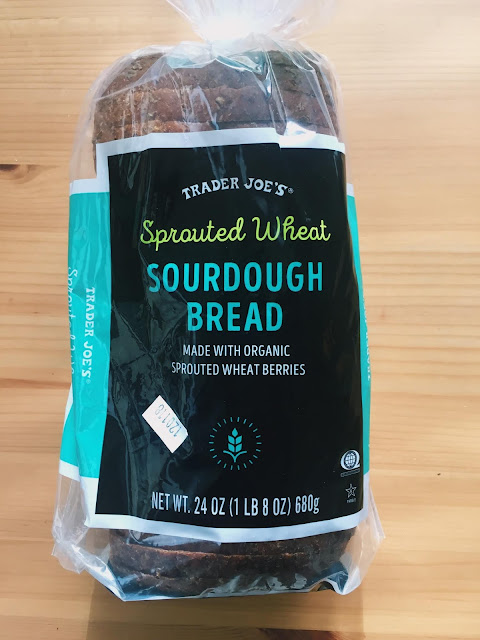 I eat sprouted bread occasionally mostly because I like the nutty-ish taste and texture. Plus, in my mind, it's moderately "healthier" (ie. higher protein content, which I care about for myself) than normal bread with refined flour etc. etc. "Healthier" by the way seems to be a contentious topic, because there's the people who are like "omg you are totally missing the point of sprouted grains and we should all be eating them because we will live longer and not get cancer" and also the other people who say "my grandparents ate white bread and smoked everyday and lived well into their 80s" (these statements were exaggerated for effect. chilllllllll). Sure, sprouted grain breads are healthier relative to refined white bread but probably not that significantly better relative to genuinely whole wheat breads.  There's something about the sprouting process that reduces the presence of phytic acid, which interferes with the absorption of certain vitamins and minerals. Sprouted grains are also apparently easier to digest and have a lower glycemic index among other things - but where are they scientific journal articles on this subject? Oh thanks, Penn State. 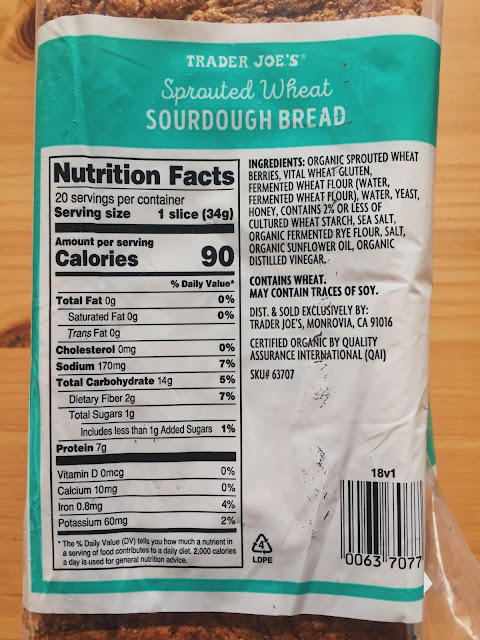 Honestly, I don't care whether or not you favor the consumption of sprouted grains for its health benefits. As long as you vaccinate your kids for their sake and the sake of public health, it's all good. Anyhoo, the ingredient list makes me wonder exactly how much sprouted grain this product actually has. Also, what is "fermented wheat flour?" A modified sourdough starter? 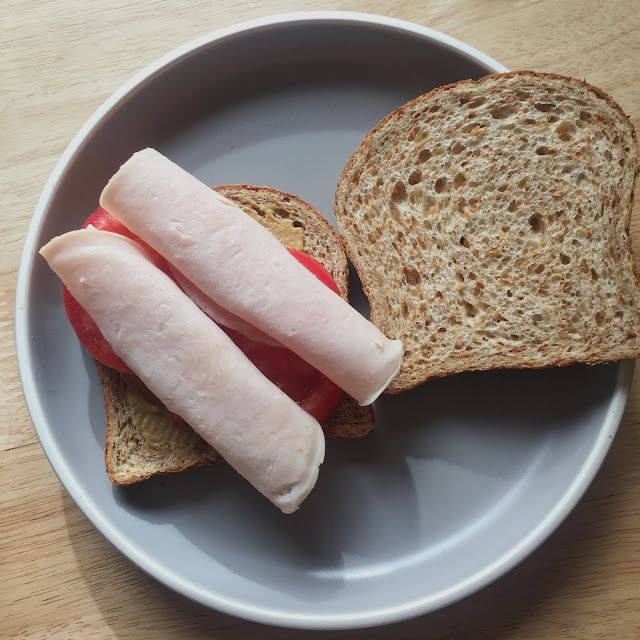 In my experience, sprouted breads must be toasted. Otherwise the bread is dry and tends to taste like nutty cardboard. If I'm not doing boring toast, I like to eat open-faced sandwiches, even when I have two slices because you can taste the sandwich toppings better when it's open-faced. Turkey, tomatoes, and some Dijon mustard atop this makes a nice pre-shift or post-workout snack.

But a few observations:
1) This bread isn't as dry as some other sprouted grain breads, like Dave's Killer Bread or the flourless sprouted bread. The wheat berries lend a nuttiness but I think the overall texture is better because there's wheat (not the same as whole wheat) and rye flour, which makes bread...bread.

2) The slices are on the small side IMO.

3) I was quite surprised at the sourdough taste they managed to get into this bread. The sourness fades overtime but initially it tasted decently close to a normal sourdough loaf.

4) Do sprouted grains spoil faster? Especially if there are no preservatives? I left my bread out on the counter for a good week, put it in the fridge for a few days, and then forgot about it and left it on the counter for another couple days with no mold whatsoever. Suspicious?

Discussion aside, I'd buy it again probably. It is actually a "healthier" sourdough bread for me. It boasts a more robust nutritional profile while maintaining a decent sourdough taste. $3.99 per loaf, which is very reasonably priced.

TL;DR: Trader Joe's Sprouted Wheat Sourdough Bread. Bridging the sprouted and sourdough worlds one slice at a time. 7.5 out of 10. Mantou Joe repurchase? For all my sourdough cravings yes.

This, my friends, is the Chinese family's go-to emergency meal. Pretty cheap, filling, and doesn't take much thought. Dump into pot of boiling water, let it cook, and eat.  Well not exactly a set-it-and-forget-it type food but almost.  Growing up I learned from listening to Doraemon/Xiao Ding Dang  cassette tapes (I'm giving away my age y'all :P) that you're supposed to add some water when it comes to a boil and do that once or twice until it's done. Trader Joe's actually has a nice selection of ethnically ambiguous dumplings (yes, there's a Thai gyoza line too, so I guess no mystery there). By ethnically ambiguous, I mean it's not really clear what the origin is. For example, if you go to an Asian grocery store, they are very deliberate about distinguishing the Chinese dumplings from the Korean mandoo from the Japanese gyoza. All dumplings, yes, but ethnically distinct, which is why I'm surprised this particular line of dumplings (the gyoza