Sliced bread changed the world y'all. Which is why I must review it for the blog. Prepare yourself for some nerdery. 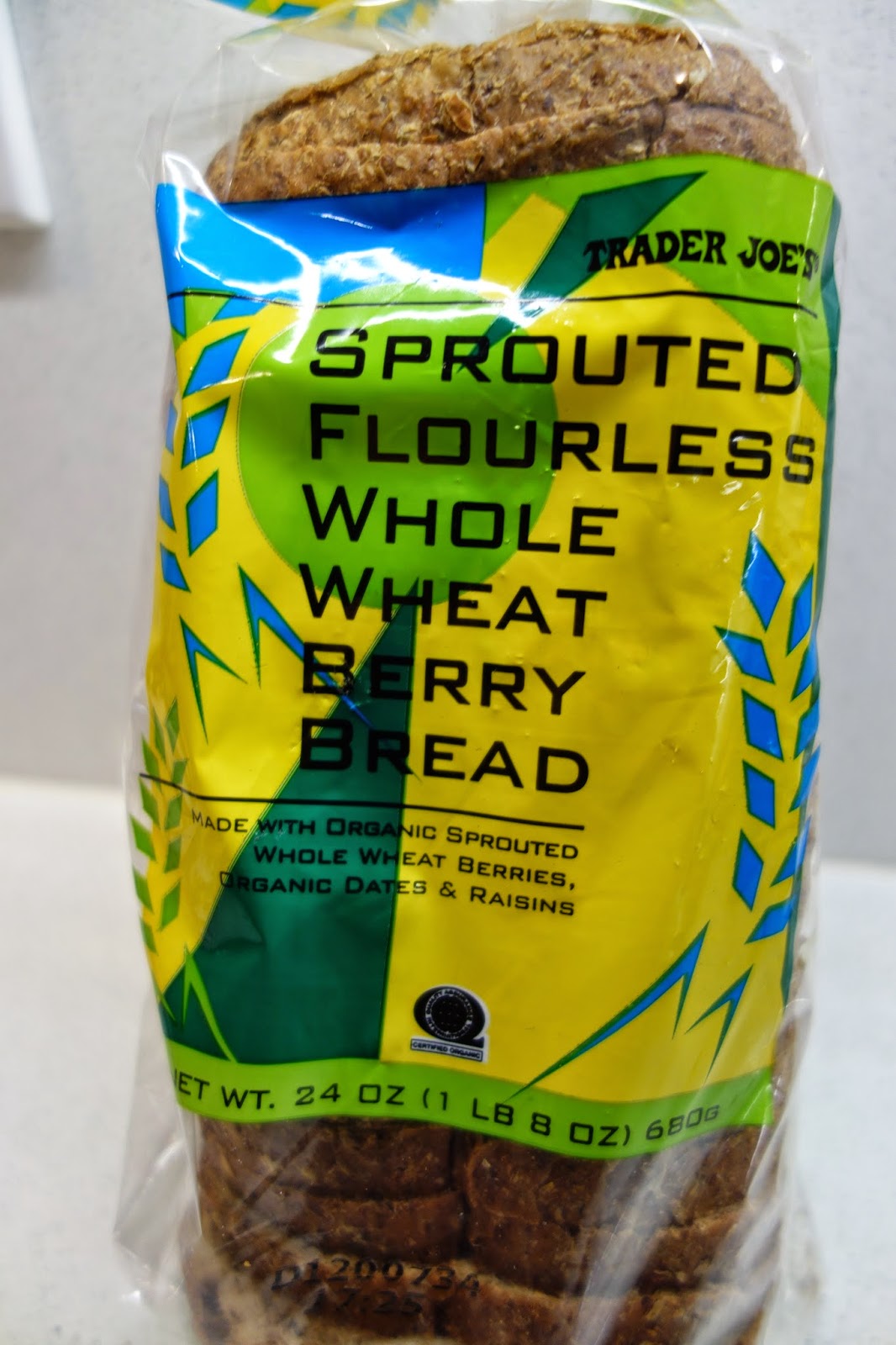 Took me two weeks to finish this loaf of TJ's Sprouted Flourless Whole Wheat Berry Bread. What a mouthful. I've been on the hunt for quick, grab-n-go type breakfast foods to support my morning dash out the door and also keep me reasonably full until lunch. Maybe I could just get up earlier and eat a real breakfast! But let's be honest, that's probably not happening anytime soon.

Flourless bread is all the rage in some diet/fitness circles because carbs are still evil y'all, or at least the refined ones are. I've been wanting to try these "sprouted grain" breads for a while just to see why they're such a big deal, but I haven't been able to bring myself to pay $5 for a loaf of bread. That's a steep price for bread. My mother would be appalled. Luckily, TJ's offers its own brand of flourless bread with virtually the same ingredients, so I went for that instead at $3.99 per loaf. Still kind of pricy but it's "organic" and still cheaper than the name brand. And hey, 2g of fiber and 5g of protein per slice! Bet your bread can't do that. 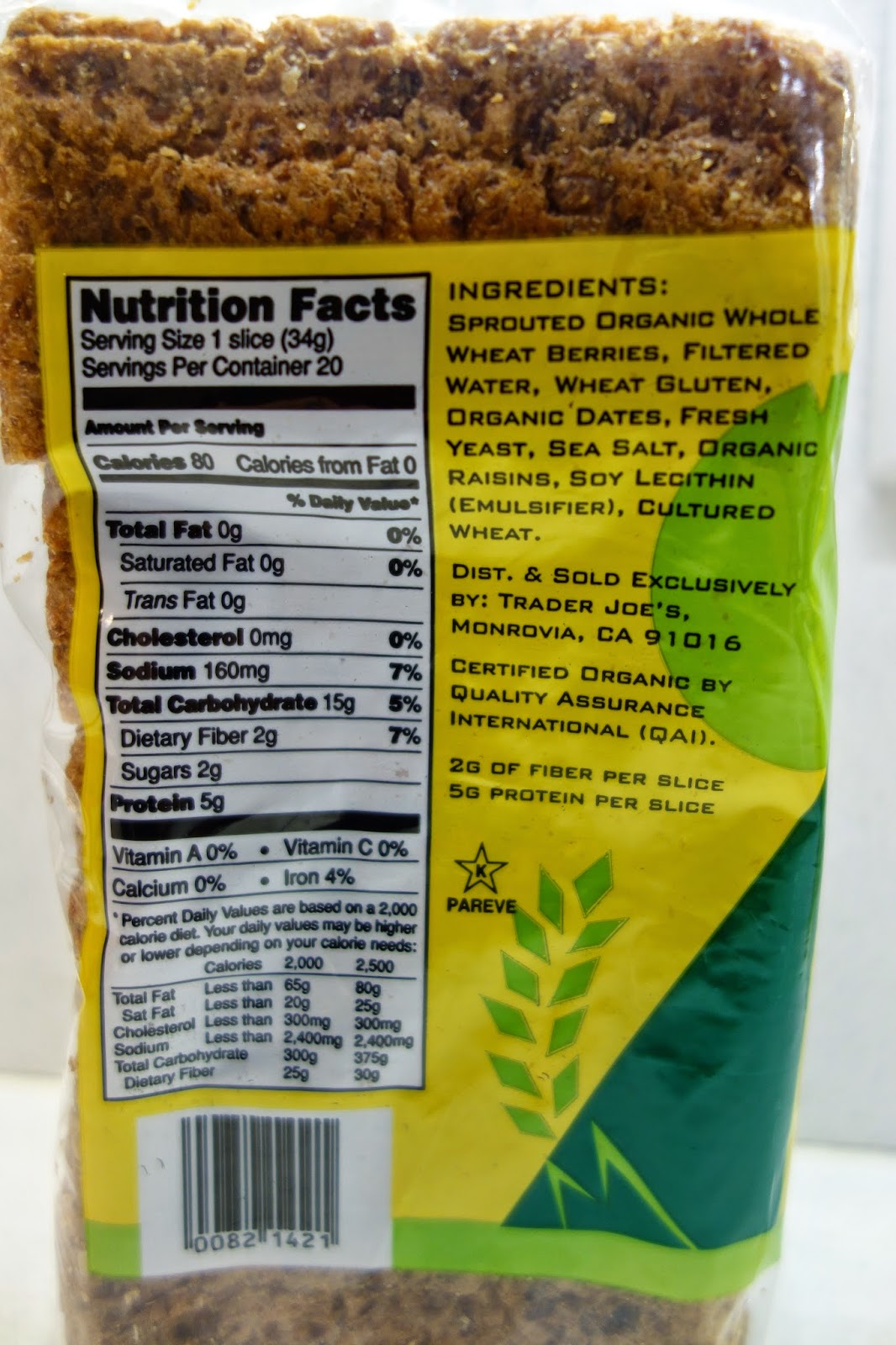 I went for this particular variety thinking perhaps it would mimic a cinnamon raisin type bread with the dates and raisins.  I thought this would be the tastiest choice out of the three TJs sprout less breads because of the dates and raisins, but sadly the sweetness is barely detectable. By the way, this bread should definitely be toasted for best results. Alone it's kind of dry and unappetizing. Toasted, however, the nuttiness of the wheat berries especially really shines and gives the bread a nice al dente bite. It's very dense for a bread, which aptly reflects the ingredients used. Taste wise, it tastes "healthy," which to some people means whole grain sustenance while to other people it means cardboard.  I haven't tried the other two options but I'm willing to bet that "multigrain" and whatever the other one is taste even healthier. I've never had the brand-name bread before, but if this is an inkling into what that other stuff tastes like, it's not so bad. If you're not a granola/whole wheat bread kind of person, you might not enjoy it.

I really enjoyed the 5g protein per slice, because coupled with a sliced hardboiled egg, hummus, and maybe some avocado, two slices of this bread really held me over until lunch. Below, I had it toasted with chicken salad. Healthy and tasty. 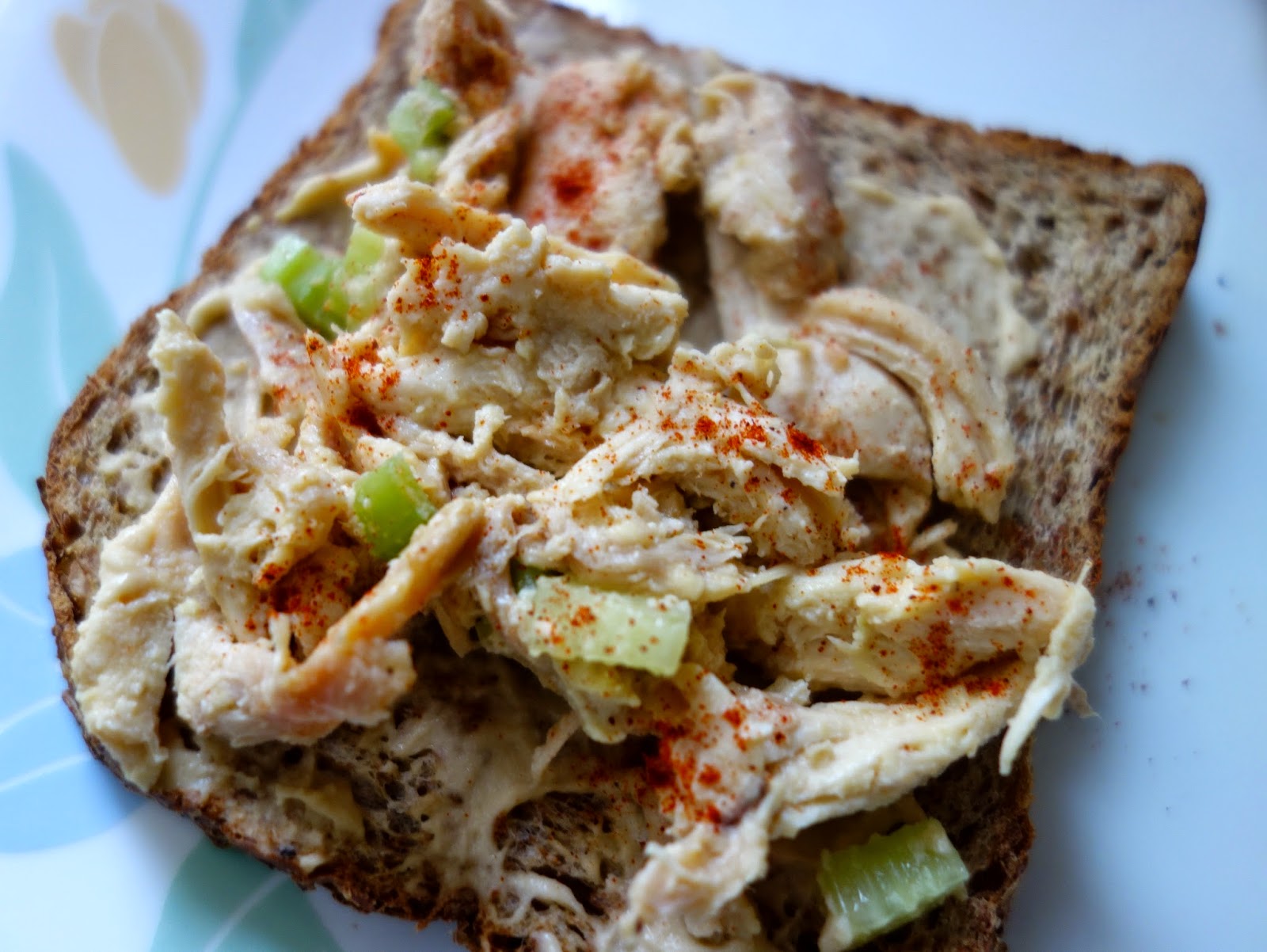 For a moment, I thought about adding this to the regular TJ's rotation, thinking that $3.99 is really a small investment for the satiety I get in return. But then I picked up the regular 100% whole wheat multigrain bread and saw that it has 6g fiber and 4g protein per slice and is only $2.99 per loaf. Plus, since the regular bread has flour, it's also fortified with thiamine and whatnot, which the flourless stuff lacks. So for that extra dollar, you get flourlessness at the expense of mineral fortification, one extra gram of protein per slice, and maybe the satisfaction of having gone organic. But is it better? Maybe. Maybe not. Will it help with weight loss and/or muscle growth? Maybe. Maybe not.

Maybe I will repurchase when I feel like boycotting flour. Which is a rare occasion. What is life without carbs?

TL;DR: Trader Joe's Sprouted Flourless Whole Wheat Berry Bread. The chewing takes as much effort as it does to say this name 5 times fast. Pretty healthy-tasting and protein-packed. 6 out of 10.