on April 08, 2019
Recently, I stumbled upon a YouTube channel called Hiroyuki Terada - Diaries of a Master Sushi Chef. And you guessed it, among his many culinary talents, he makes sushi. Fancy sushi. Sushi made from Walmart ingredients (you know I requested a video for Trader Joe's ingredients). And he makes sushi made out of atypical sushi ingredients (like junk food, Big Macs, Krispy Kreme donuts, etc.) in a series called, "Will It Sushi?" And while it's quite impressive that a Big Mac can be turned into something that resembles sushi, everybody knows that it sure ain't sushi, which is fine because the point of the series is tackling a creative challenge. And while I don't think these new gyoza are that avante garde as a KFC sushi roll, this product does make me wonder if there's a TJ's boardroom whiteboard scribbled with "Will It Gyoza?" ideas. I have never had salmon in a gyoza, and today we ask ourselves, "Does it gyoza? Should it gyoza? Does it gyoza to the point where it justifies an extra $2?" 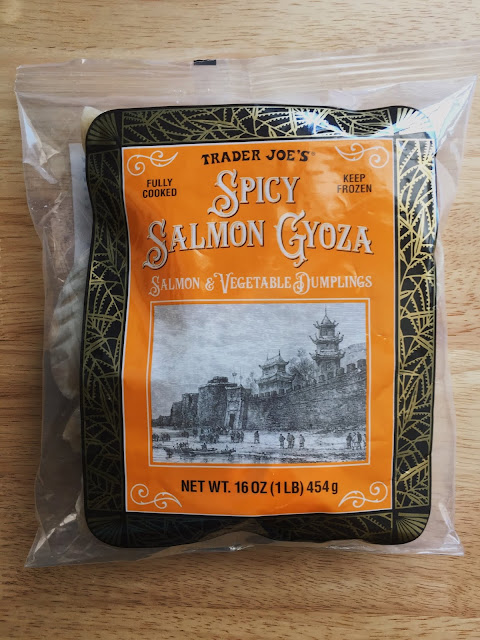 By the look of the packaging, it's safe to assume that this new spicy salmon variety shares the same manufacturer as the pork gyoza, a favorite and freezer staple in my house. 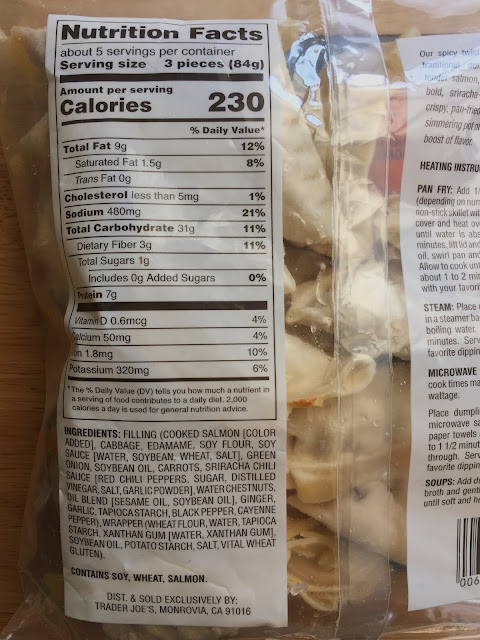 The nutritional stats resemble the standard numbers for any other freezer dumpling, perhaps even better because there isn't anything too funky or unpronounceable. 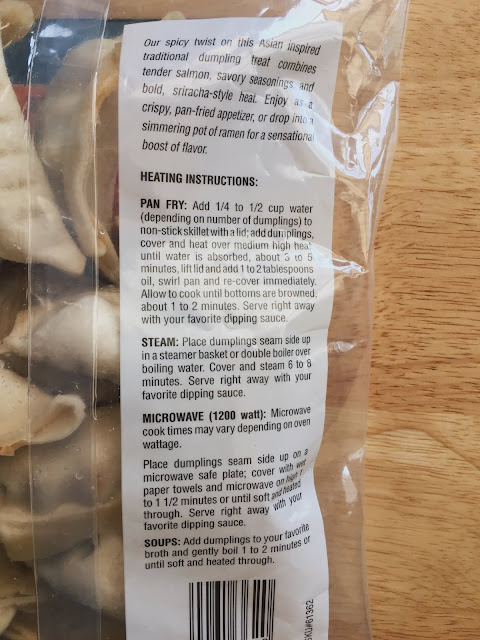 What exactly is "Asian inspired?" Is it, "I tried to pay homage to a culture different from what's 'normal' or 'what's mine'? So therefore, it's sort of what I determine to be Asian but I might actually be inaccurate but does that really matter because does authenticity in the traditional sense matter because authenticity is being defined everyday." I'll stop here because not everyone came here for a podcast or TED talk, hah.

To note - I have basically ignored the package instructions (four options wow!) because in my house we do pre-cooked frozen dumplings in the air fryer. 12-15 minutes in an air fryer set at 375 - 400 (depends how dark you want it and how impatient you are for food). They come out crunchy, like a pan-fried potsticker minus the work of having to actually pan-fry it. Whatever you do, I wouldn't recommend microwaving it unless you're a poor college student with only a dorm room microwave. 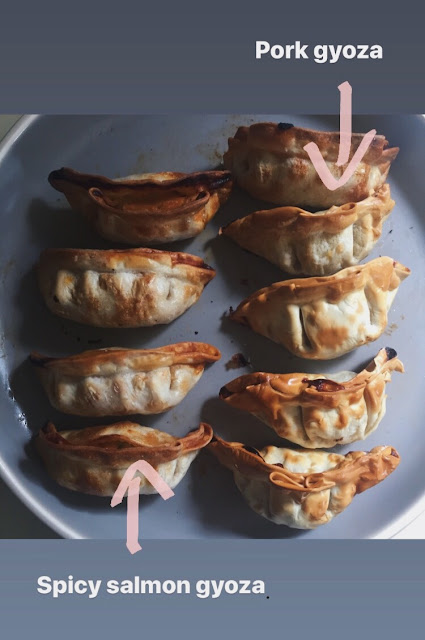 A and I had them side by side with our favorite pork gyoza for comparison's sake. The spicy salmon have an extra horizontal fold at the top while the pork gyoza only have regular pleats. Note that it's hard to get even color with an air fryer, but it is relatively more even if you flip them halfway through cooking. 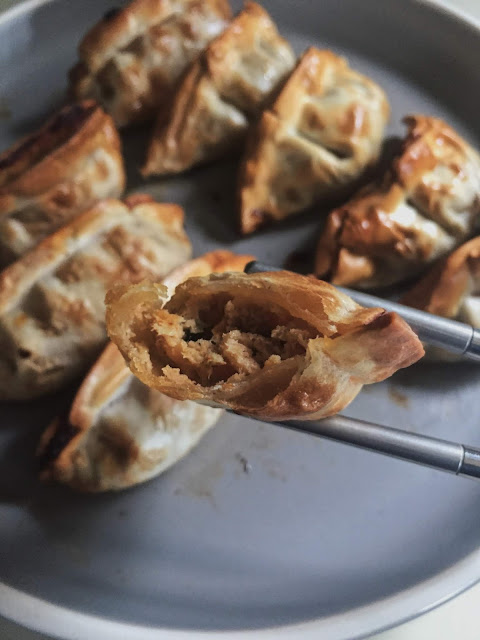 1) Before we ask the question, "does it gyoza?" let's answer the question, "should it gyoza?" I suspect most people would say, "well why not?" Whatever your answer is, it likely reflects your cultural values. In Chinese culture, fish is typically shared and eaten whole. And it's definitely on the table for birthdays and New Year's because it symbolizes long-life. Salmon is nice and fatty, delicious, and nutritious. It's also not exactly a budget protein (compared to cheap chicken drumsticks and other tough, cheaper cuts of meat). So if your family/culture leans thrifty, why would you take something as nice as salmon, blitz it to shreds, and stuff it into a dumpling? It's not a good or bad thing - to me, it's just a little weird. But fine, whatever.

2) Spicy salmon, I think, is understood here as something resembling the spicy salmon in a spicy salmon roll except cooked (and not the spicy version of my husband/mother-in-law's classic honey-soy salmon). It tastes alright actually but it's hard to distinguish the different flavors because the spice overpowers everything. Then again, I guess that's the point?

3) Most bites taste like a generic fish but distinctively like salmon. Occasionally it tastes like salmon. Which goes back to my first point - while I like eating a nice lobster or crab cake or whatever, if I wanted to eat a nice lobster or crab or salmon, I'd want to eat it in the form that shows it off best. While dumplings are delicious, I would never take a nice filet mignon, blitz it to shreds with some random vegetable pieces, and stuff it into a dumpling. It just doesn't make sense.

4) The texture is not nearly as bad or as dry as the asian-style ground chicken, but I would imagine some people will definitely be turned off by the mushy texture.

5) The vegetables are probably in there to offset the mushy texture. That's why there's water chestnut (undetectable) and random almost whole edamame beans. Strange to me because whatever you stuff into a dumpling you usually blitz to pieces so that you can bulk up the meat filling with vegetables without being too conspicuous. 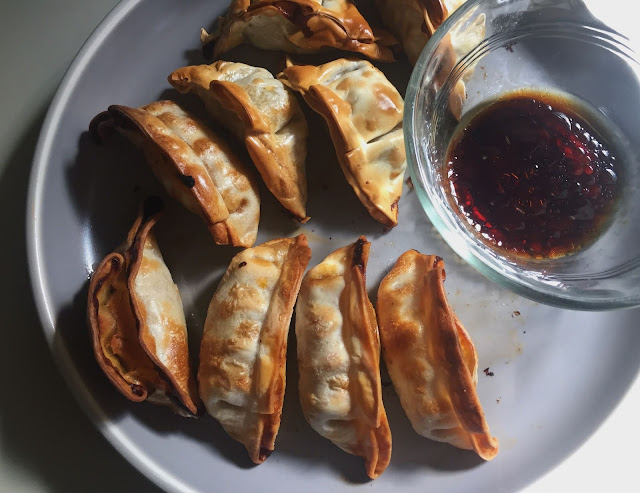 6) Back to the question of, "does it gyoza?" To that I say, "I guess?" I mean it's edible. It doesn't taste bad. I can see some people enjoying it. But it's certainly not my favorite form of gyoza or my favorite form of salmon, spicy or not, sushi-ed or not. A likes the pork better because it tastes fattier (even though the salmon is objectively fattier). It tastes fine as is but would certainly benefit from a dipping sauce with a little bit of acid (a mixture of soy sauce, sesame, black vinegar, and maybe some sugar) to offset the spiciness.

7) $4.99 for a 1-lb bag that serves 5 (one serving meaning 3 dumplings, which might be fine as an appetizer but who eats 3 dumplings as a meal. Also, the pork potstickers serve 7, which is sorta irrelevant in my house because one entire bag *can* serve the two of us. Just sayin.) - not as expensive as going out for a spicy salmon roll but also not the best value for your money.

8) Somebody was definitely "Asian inspired" to fuse spicy salmon roll with gyoza. Points for creativity and participation but it's not winning any trophies in my book.

So is it good? Should I buy it? I presented 8 points so you can make an informed decision and not throw your money away without knowing the risks and benefits.